Yesterday (19 August) I went into the Washington, DC, to the Connecticut Avenue “HQS” of WAMU radio, with Gene Bowlen, to do an interview on WAMU about the Dwight Diller book and the Terry Richardson/Dwight Diller music project.

The book came out in April: 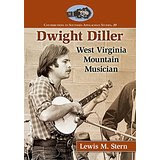 The CD and Video Project derived from the momentum the book research generated : plenty of field recordings of Dwight's banjo and fiddle work from the early 1970s, and the urge to get him to do another contemporary CD.  In November 2015, Dwight and Terry Richardson, a guitar playing Pocahontas County friend of Dwight's, drove to Gene Bowlen's BearCade Recording studio, laid down the tracks for a new CD, and did a house concert that was captured on video.

Gene and I both of us felt the need to single out the late Terry Richardson for his musicianship, for his fine guitar playing, for the incredible way he meshed seamlessly with Dwight’s banjo work.  Terry passed away in May 2016.

I noted that besides the being such an uncannily sensitive musical partner who knew and lived the music that Dwight and he grew up playing, he was such a part of the culture, and such a fixture in Pocahontas County – as much a part of the “institution” that the Richardson Hardware store represents.

I told the story of what to me was the meaningfulness of social bonds in that community – Dwight and me pulling up in Dwight’s old boat of an automobile, parking in front of the hardware store, Dwight walking into the store and telling them that he needed to borrow a guitar.  A guitar being handed to Dwight over the counter.  End of transaction.  Handshake, and the strength of personal relationship, being the only evidence of any transaction.  To me, that was the symbol of why Dwight stays where he was born, why he embraced what WV represents – in spite of hardships that might be part of that equation: tough winters, hard economy, winding hairpin roads, whatever.

As part of the WAMU interview, Gene provided some cuts from the CD.  So I heard them again for the first time since the November 2015 house concert at Gene’s Port Republic home.  The two of them, Dwight and Terry, playing together were tight and lean, spare and muscular, hard up on the backbone of each tune they played.  Waynesboro, Shelvin Rock, Cranberry – the last being one of my favorites.  They created a musical moment that sprung from a partnership with real creative force.

Gene spoke as a real musician can, and as a real sound guy is able to, about the strength and delicacy, the sensitiveness of Terry's guitar work, and the way Dwight and Terry wrapped together neatly.

I listened very closely to the cuts Gene brought with him to play during the interview, because Gene’s quality recording brought out sounds that my old ears could not themselves pick out at the November 2015 concert.  I heard more of Terry’s guitar, and saw – or heard - how it wrapped around Dwight’s banjo work, and nudged things along, how it provided a musical substructure for Dwight’s banjo – and fiddle - work, and how the two forces – guitar and banjo – combined into a flawless sound that just took my breath away and made me want to get up and dance.

They frowned on that in the radio station, especially on the air, so I tried to tap my heel inconspicuously but probably wasn’t very successful.

You might hear that in the background if you manage to find a link to the WAMU Bluegrass Country interview conducted so ably by Rosemarie Neilson, and that is this banjo-guitar pairing insinuating itself into my brain, my blood, the marrow of my bones and giving me a perfectly delightful sonic moment.