I have not blogged since 27 January 2015, a fact that some avid bloggers in the family tell me is a cardinal sin in blogging circles, where daily jottings are far better to this channel of communication that lengthy quarterly reports.  I get that, I understand the premise, and the utility of daily blogging, as much as daily jogging, but I generally don’t get to that task – so instead, I’ll just go with another lengthy quarterly report replete with 27 eight by ten color glossy photographs laboriously explained in four part harmony.  In case I don’t get back to the job of blogging for another two or three months
. . .

In late September 2014 I took in a Cole banjo at the LBBH shop for repair.  Here’s a good thumbnail history of William Cole banjos:

Instruments marked "W.A. Cole" on the dowel stick, like the one I received at my repair ship, date from 1890 to 1926. When they bought Cole's in 1922, Nokes & Nicolai, primarily drum manufacturers, continued to make banjos and some ukuleles, presumably with the W.A. Cole name, until they, in turn, were bought out in 1926 by the Liberty Musical Instrument Co. of Chicago, IL.

Cole split up with Fairbanks in 1890.   Some of his banjos are in collections from this period, and they represent essentially a Fairbanks & Cole "Imperial" banjo but with no model designation and only Cole's name on it.  The neck angle adjustment mechanism that appears on all Cole's Eclipse banjos is present on early models in the 1890s.

The metal tarnish, wear and tear on the rim and the thin frets, plus the fret placement (by hand), suggest this banjo is from the late 1890s- very early 1900s.

Cole started making banjos under his own name in 1890.  One of his innovations was the neck adjuster plus neck collar mechanisms found on later "Eclipse" banjos such as yours.  The banjo that came to me for repair has these features.

The Model 5000 banjos were the top of Cole’s line.  They featured imaginative peghead and fingerboard inlays with the exquisite engraving seen on most Fairbanks and Cole banjos from this period.  In addition, 5000 Model banjos were characterized by finely carved boat heels, a long backstrap, and cobra hooks on the rim.  I’d guess this banjo is a 5000, though the heel carving is not nearly as ornate as I’ve seen on some Eclipse models.

The Model 4000 banjos featured engraved pearl on the peghead and fingerboard, a long ebony backstrap, and a beautifully carved heel.  The pearl inlay on the peghead was often similar to that found on some Fairbanks instruments from the same period.

After the Fairbanks & Cole partnership dissolved, Cole manufactured banjos under his own name, the best of which were equipped with the "Eclipse" tone ring system.  The model 3000 was about in the middle of the Eclipse line, and all featured lovely (uncarved) boat heels and exquisite engraved pearl inlays.

The lower priced "non-Eclipse" line (Model 2000) included the "sure-grip" tailpiece (which is actually a cammed no-knot) and the patented Cole neck adjuster.  These banjos also featured pearl inlays and a boat-style heel (no heel carvings).

The "Professional Special" model in the Cole's Eclipse line date from around 1900.   These were well constructed banjos without the fancy ornamentation of higher models, though they did sport multiple laminations under the fretboard and fancy engraved peghead inlay, and were fitted with the Cole neck collar used to tighten the neck against the rim.

Model 1500, from about the 1895/96 period, was just below the "Eclipse" line in the Cole catalog, with fingerboards decorated with saw-cut pearl inlays and a nice boat heel, uncarved.  These came in ladies or parlor banjo scales.

All of these models bore serial numbers.  I cannot find a serial number on this banjo.  That could mean it was a parts banjo, drawn from existing stock in a factory or show room.

As Mike Holmes has said:

Cole banjo serial numbers are frequently on the top of the strut, on the side towards the head; to see them you must first remove the head or use a mirror. Often the same number is stamped somewhere on the inside of the rim, too. It can be faint, and sometimes it was painted over, making identification even more difficult. Occasionally, the rim number is between the head and the strut. Sometimes there are only 2 digits, which match the last 2 digits of the serial number. Guitar and mandolin serial numbers are generally stamped on the end of the peghead.  (http://www.mugwumps.com/WACole.html)

The heel carving on this banjo does not seem as though it would go on their highest grade model, but the inlay on the fingerboard is certainly sophisticated enough to be from the 5000 series.

This banjo, with a distinguished neck and notable fingerboard inlay, nevertheless represented a challenge.  The pot was seriously ovalized – out of round from age and perhaps distortions that resulted from temperatures in storage.  A good deal of the rim veneer was essentially suffering from the moral equivalent of dry rot and as a consequence was disintegrating.

The neck itself was modified to take a post-production fifth string geared tuner that was jammed in tight and was further locked in by the shrinkage and warp of the decorative veneers under the fingerboard --  those have begun to split and have compromised the neck.  The biggest problem, however, was the manner in which the fifth string tuner was planted.  A good deal of the wood between the tuner post and the fingerboard was gouged out to make room for the tuner shaft in a way that thinned the fingerboard at precisely the point of that wonderful butterfly inlay.  It made that butterfly inlay vulnerable.

That also made it virtually impossible to plant a new fifth string peg to replace the old, broken one.  To do the job the “right” way, by smoothing out the existing hole, doweling it and redrilling, I would have blown past the thin wall that remained of the fingerboard in the area of the peg.  An alternative would have been squaring off the area, removing all the wood, and redoing that section of neck and fingerboard but it would have sacrificed the inlay and required at least a partial refret – in the fact of the fact that the neck itself along the line of the decorative veneers had begun to delaminate, I took the path of least resistance and seated a modern fifth string peg using metal glue (and indian ink for cosmetics).  Not the best way to do this, but the least costly method in view of the thinness of the already compromised fingerboard.

The ovalization affected both the rim and the tension hoop, meaning that the banjo was stored with the old skin head on intact, and both the wood rim and metal were gradually taken out of round.  That meant putting on a new skin head was a real wrestling match.  I used the original flesh hoop, with a bit of cooper tubing to lock the unbrazed end, and counted on the skin itself to wrap the hoop close to the pot.  In the end, though, the hooks needed to be reshaped slightly to fit the contour of the flesh hoop once the new skin was drapped; I tried to make sure that the flesh hoop was most exposed on the southern end of the banjo, symmetrically.  One of the original bolts broke off in the shoe shaft and had to be replaced; these were made of simple, and often brittle sand cast metal.  Putting on a skin is usually a two day job.  It was a four day job in this instance, entailing close monitoring of drying time etc.

I used older friction pegs as replacement for the after market guitar type tuners that had been installed at some point.  I filled and colored the tip of the holes that had been drilled in the back of the peghead to accommodate those guitar tuners; the holes are still visible but are effectively sealed.

I cleaned the frets, and cleaned the inlay and engraving, and stabilized the inlay with a combination of cyanoacrylate -- super glue but carpentry grade strength and drying consistency – and sandings from ebony to form a smooth filler.

I salvaged as many of the loose inlay pieces on the rim as I could, clean the exterior and interior of the rim, reseated the inlay, and stabilized the rim veneer where possible, using a combination of a slurry of cyanoacrylate and ebony dust, and in some areas yellow carpenters glue and ebony dust.  I then applied a layer of tung, buffed it, let it dry – and finished it off with a coat of bee’s wax, buffed strenuously to form a finish coat.  Still very uneven because of the way the rim has delaminated over time in a varied way, but it should be essentially stable (though not impregnable).

The sand cast tailpiece was worn and eventually, as I was preparing to remount it on the banjo, cracked.  I was going to use a modern No Knot, but the bulge of the flesh hoop over the ovalized part of the rim made that impossible, so I installed an old stock simple, low profile tailpiece of the sort that was common in the late 1800s-early 1900s.

I deployed a two foot bridge by David Cunningham with a rosewood tip, (5/8th inches tall) and used Nylagut strings; I am opposed to using even light gauge metal strings on an old banjo like this, especially one where there is a bit of drying of the wood, and any additional tension is likely to have subtle impacts on the banjo.  Plus, the combination of a goat skin head and nylagut strings always produces a compelling sound.

I “rescued” some of the old parts and put them together in a framed “window box” of sorts, preserving some of the parts and pieces that hung on the banjo (original skin, tuners, strings, etc) when the owner’s father played it, as a remembrance of sorts.

The banjo was intended as a surprise gift for the client’s son, upon his May 2015 graduation from James Madison University.  This is one of those instances when a client wants a badly beaten banjo salvaged, fixed up so it would be suitable as a wall hanger.  Since this was a Cole, with a nice big pot, I had the sense it would make a nice sounding banjo so I fixed it up to a level of playability – a bit beyond the wall hanger level but there was always the chance that the grandson would want to learn some clawhammer once he laid hands on this nice old banjo. 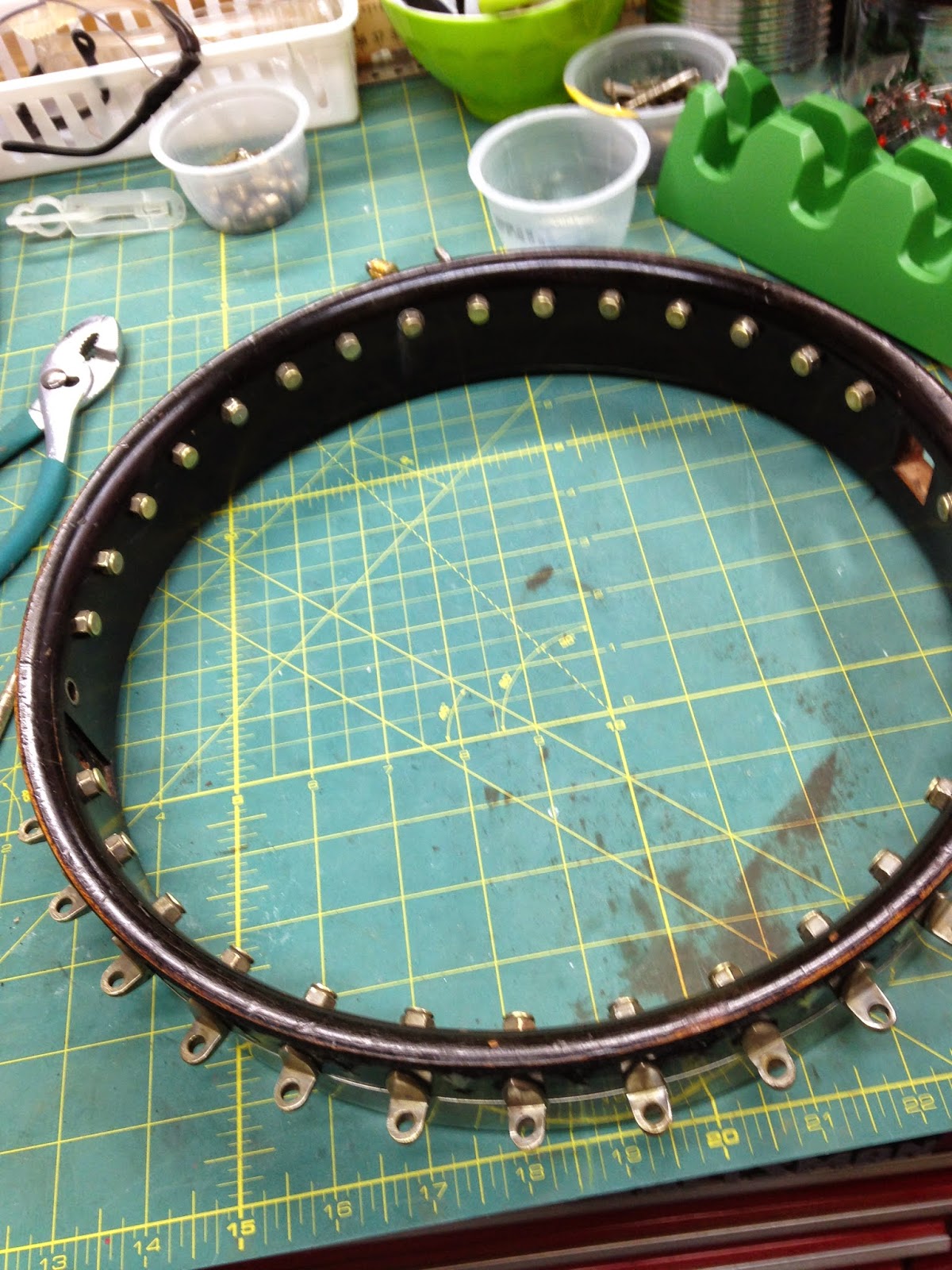 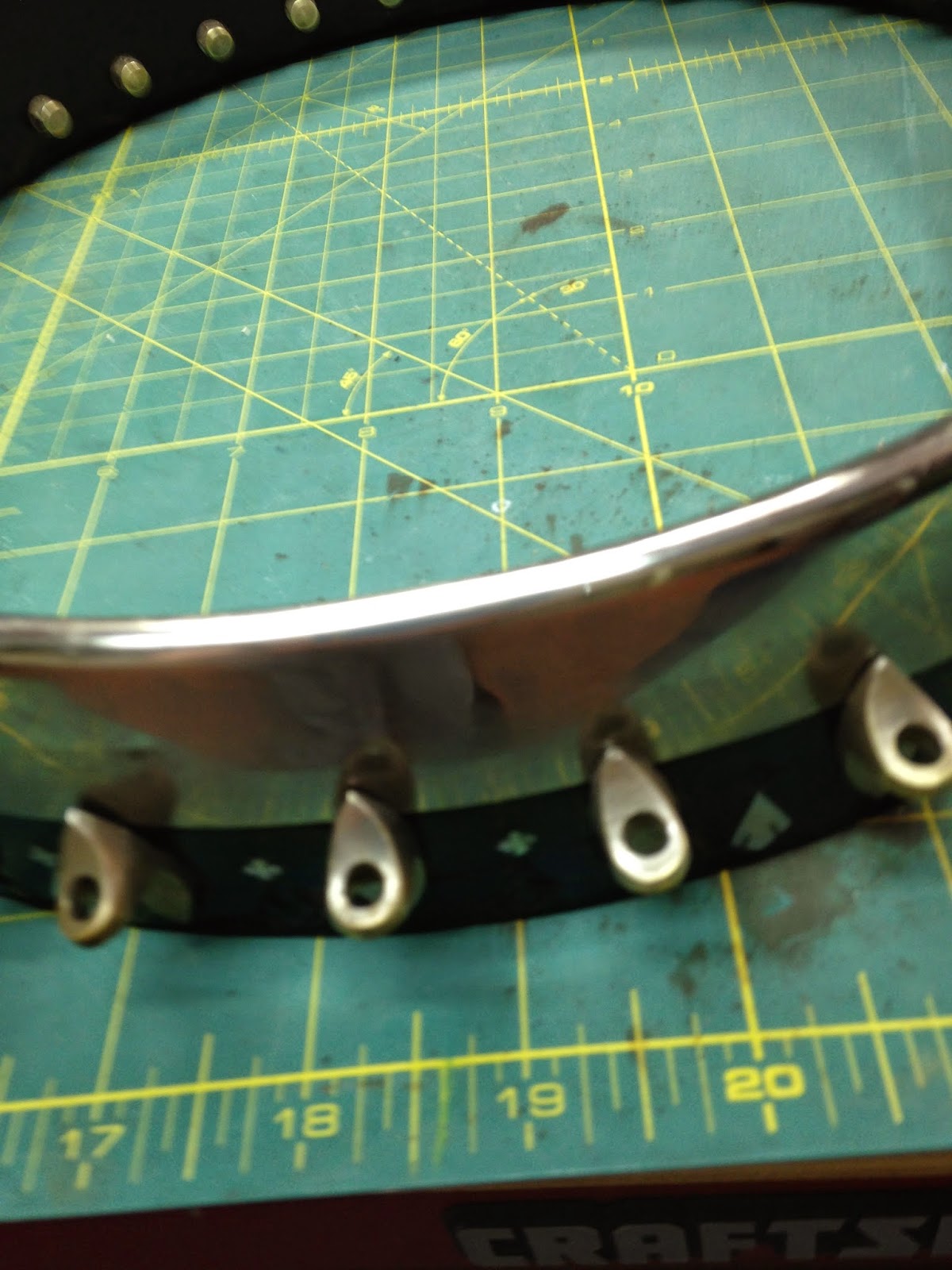 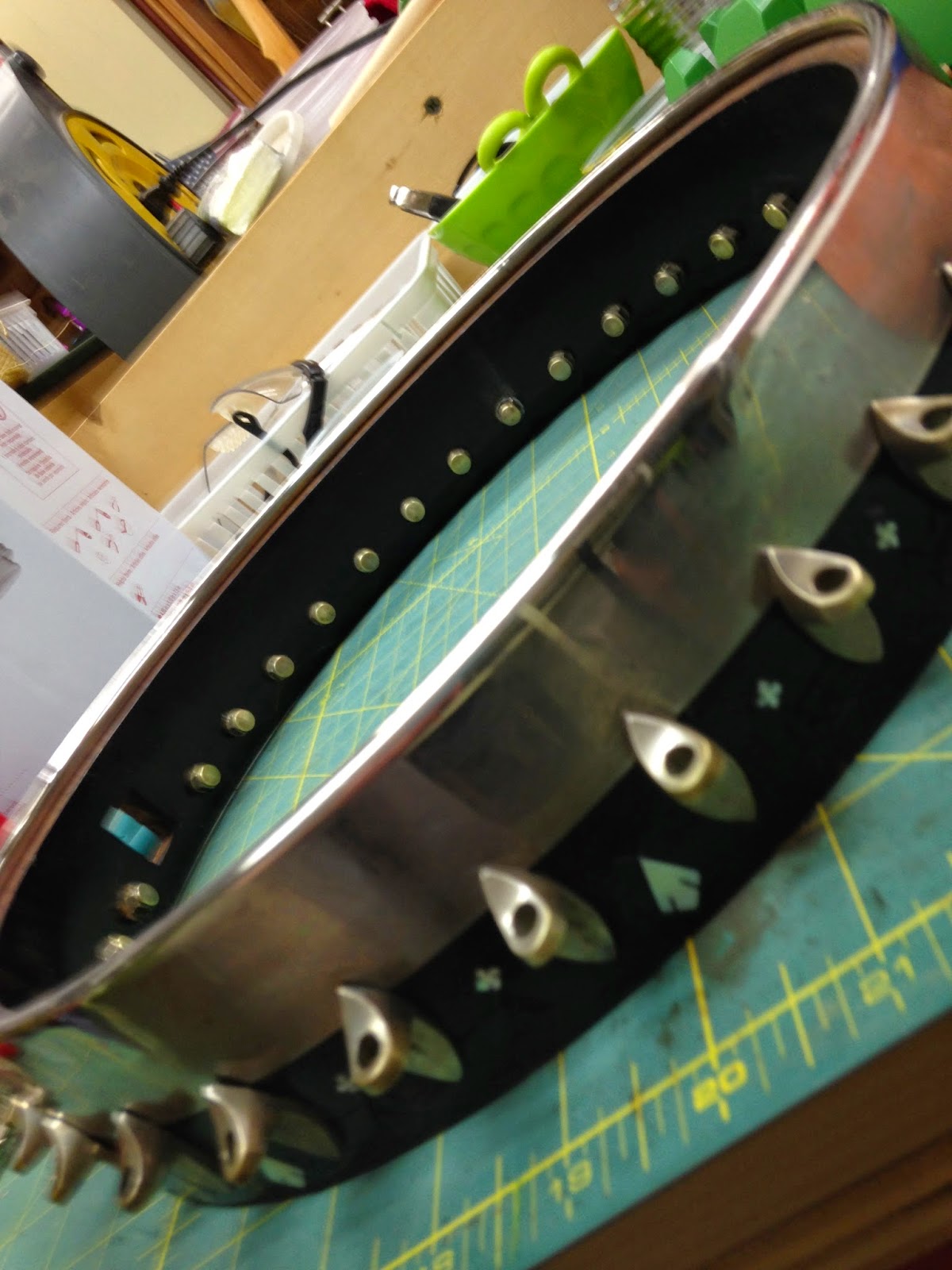 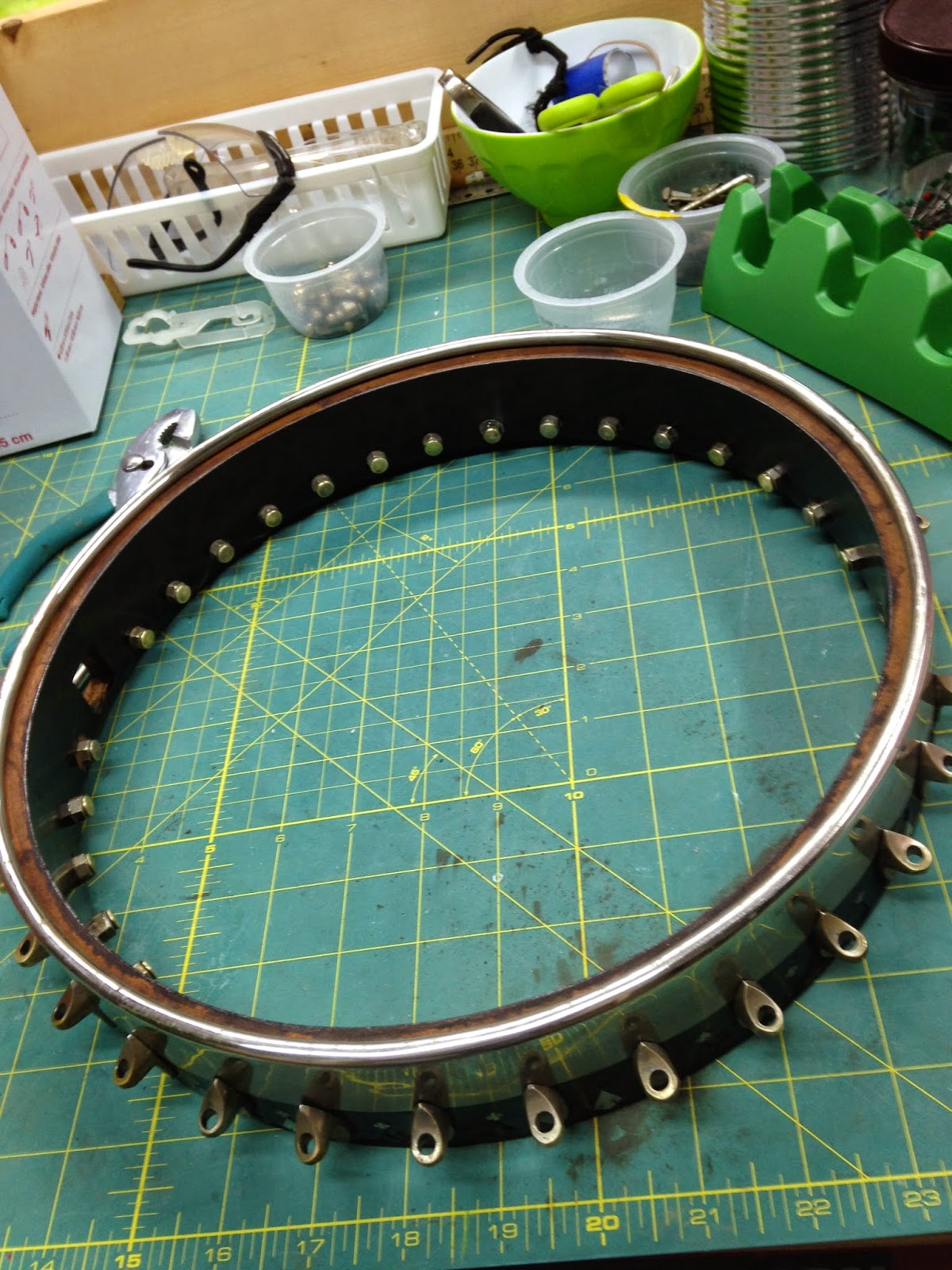 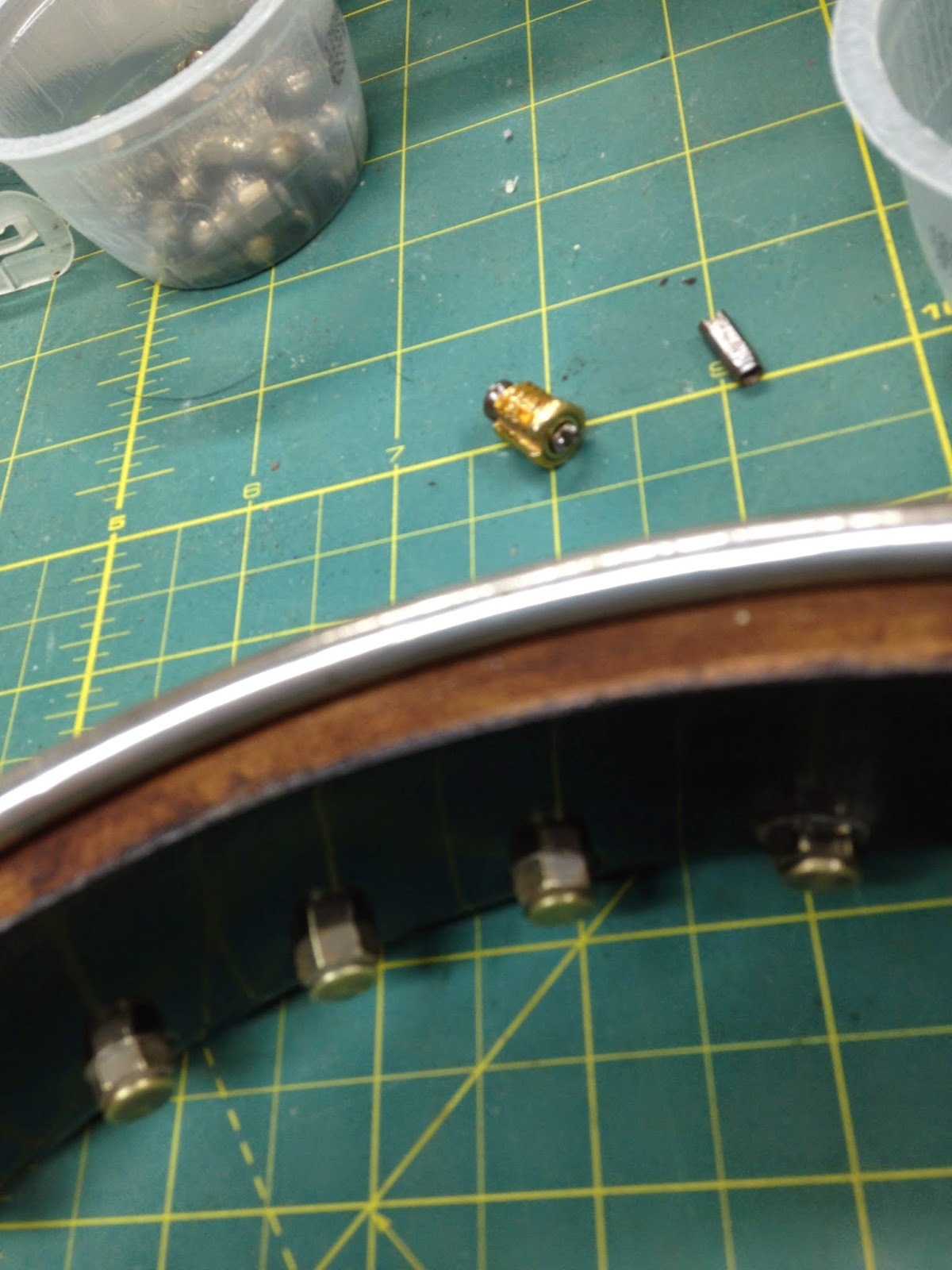 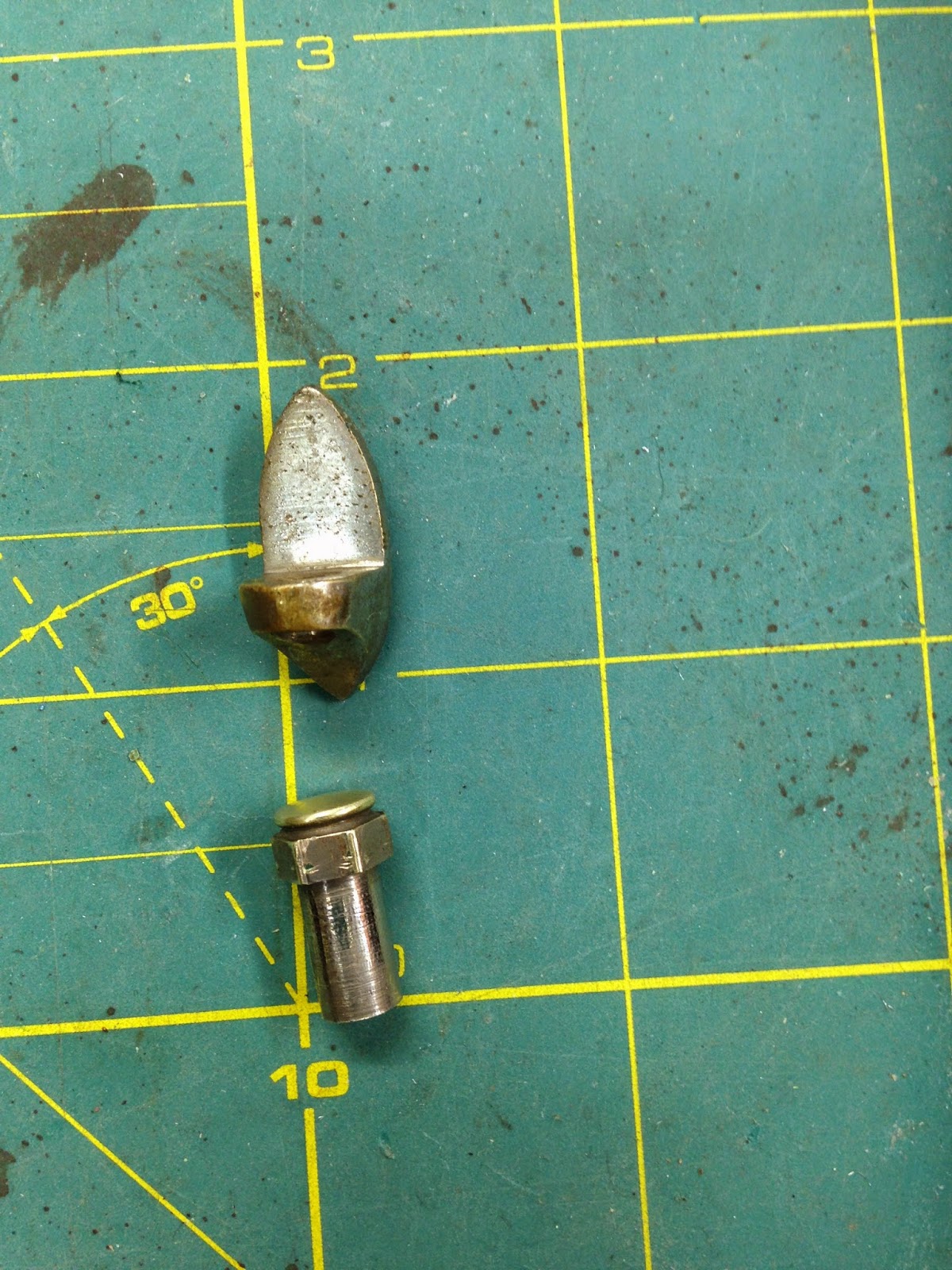 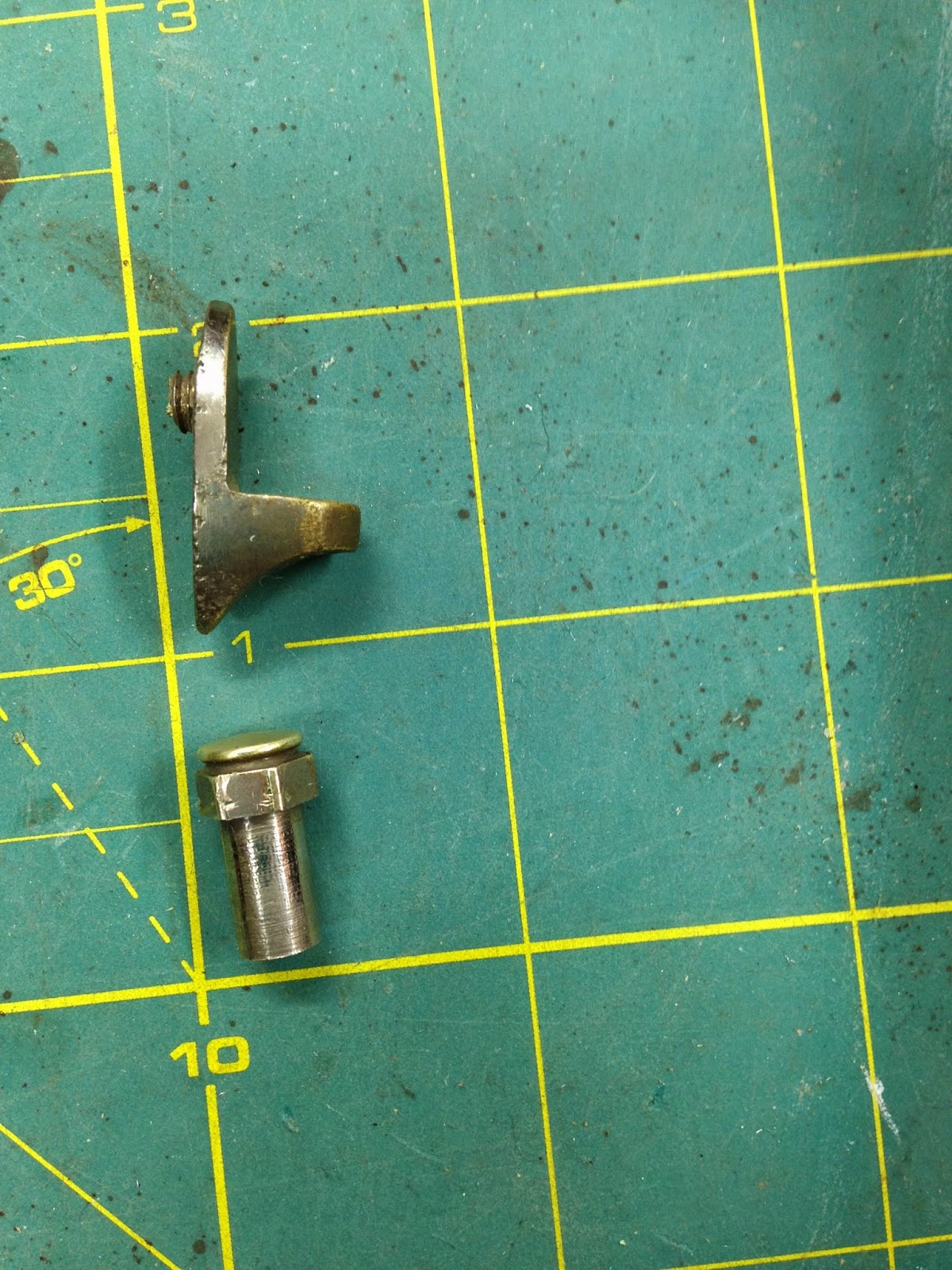 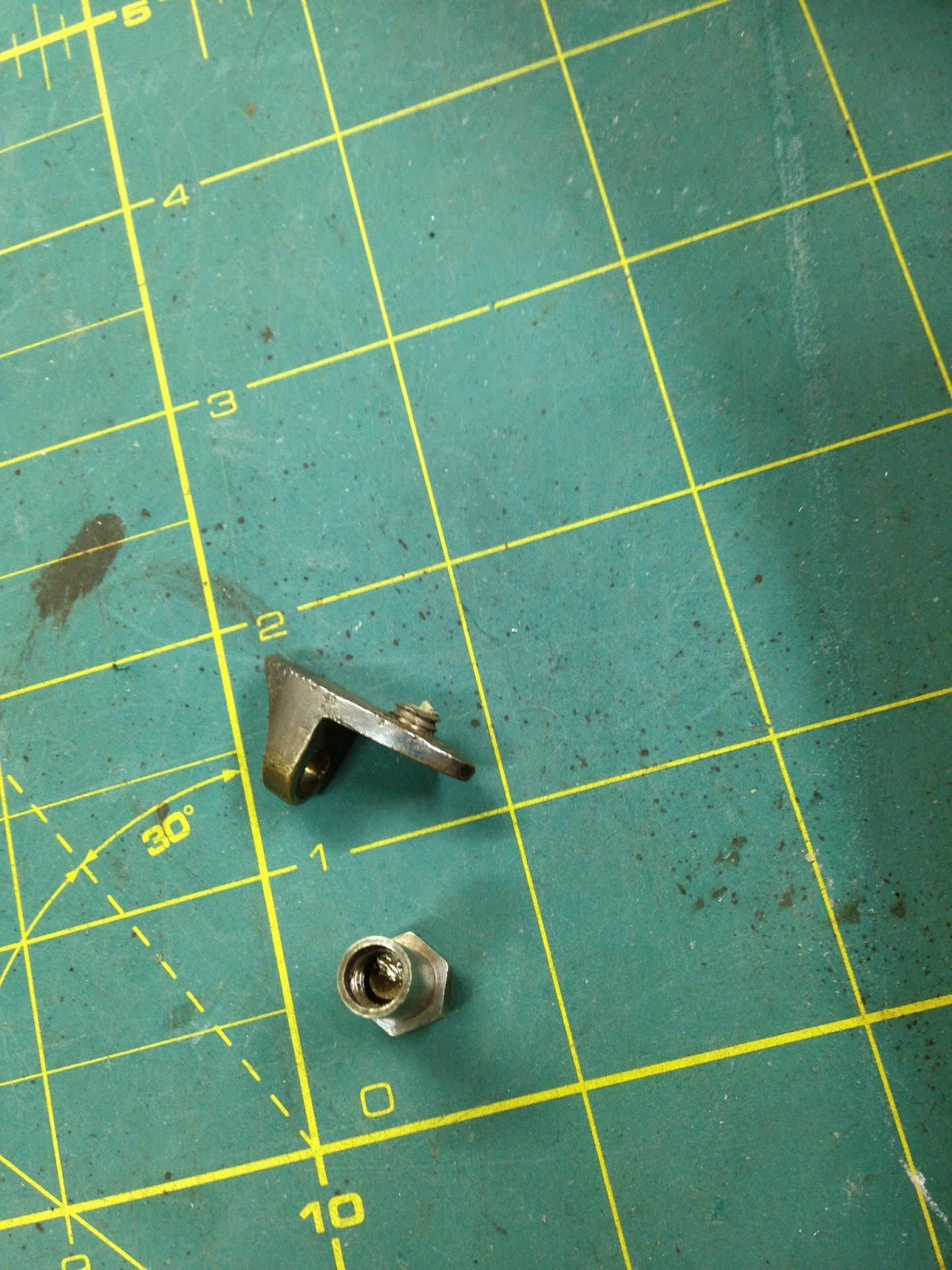 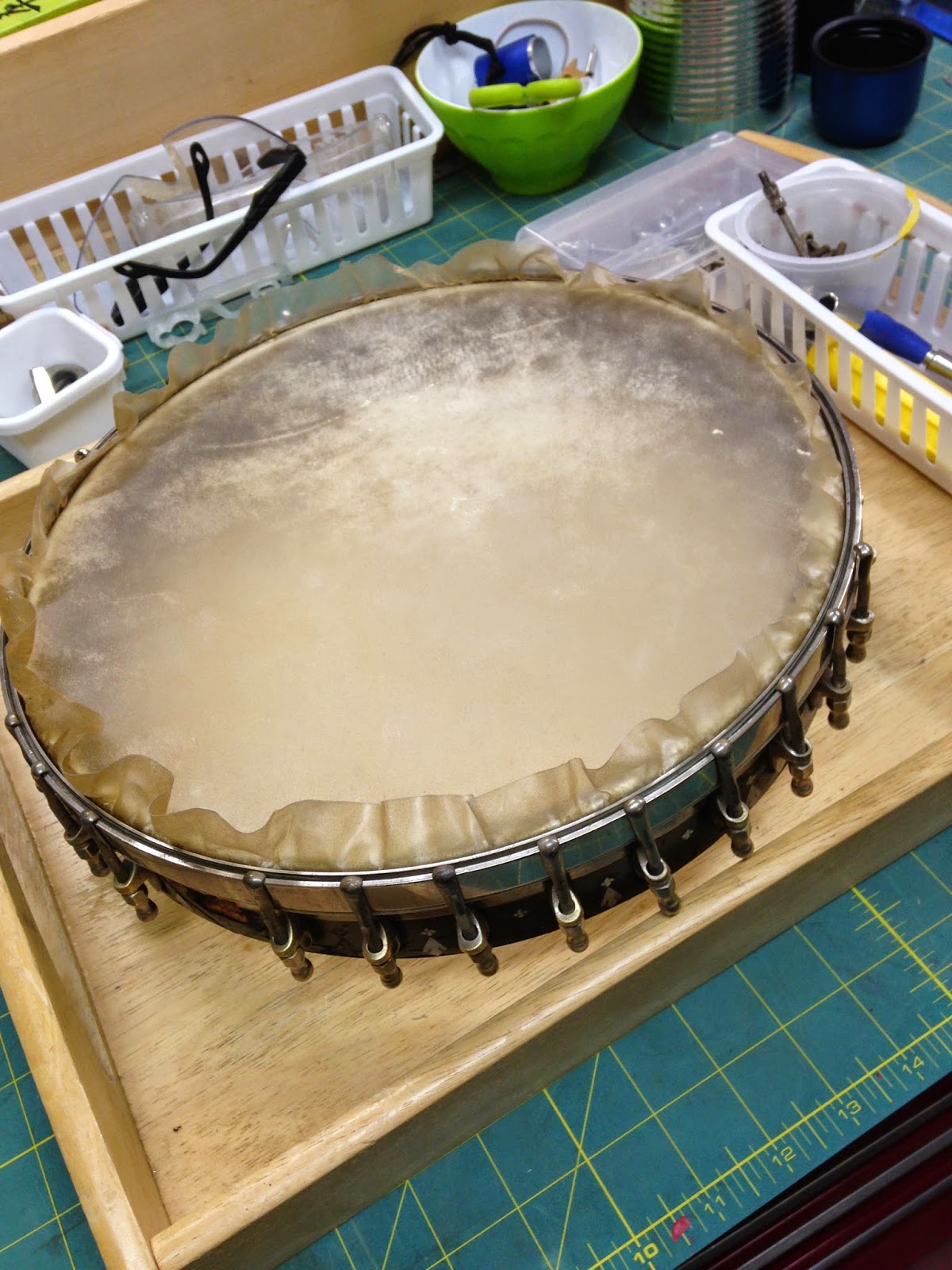 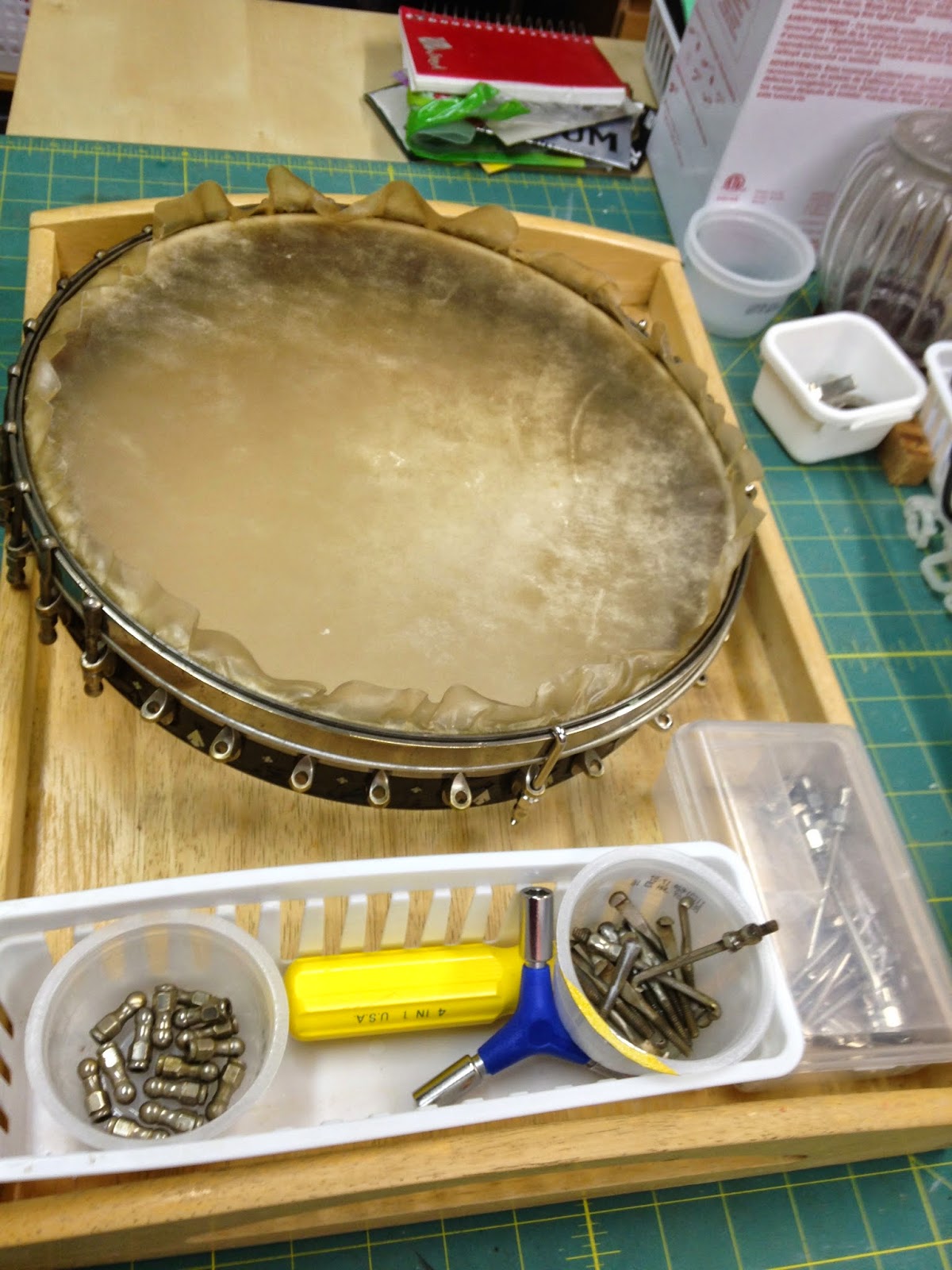 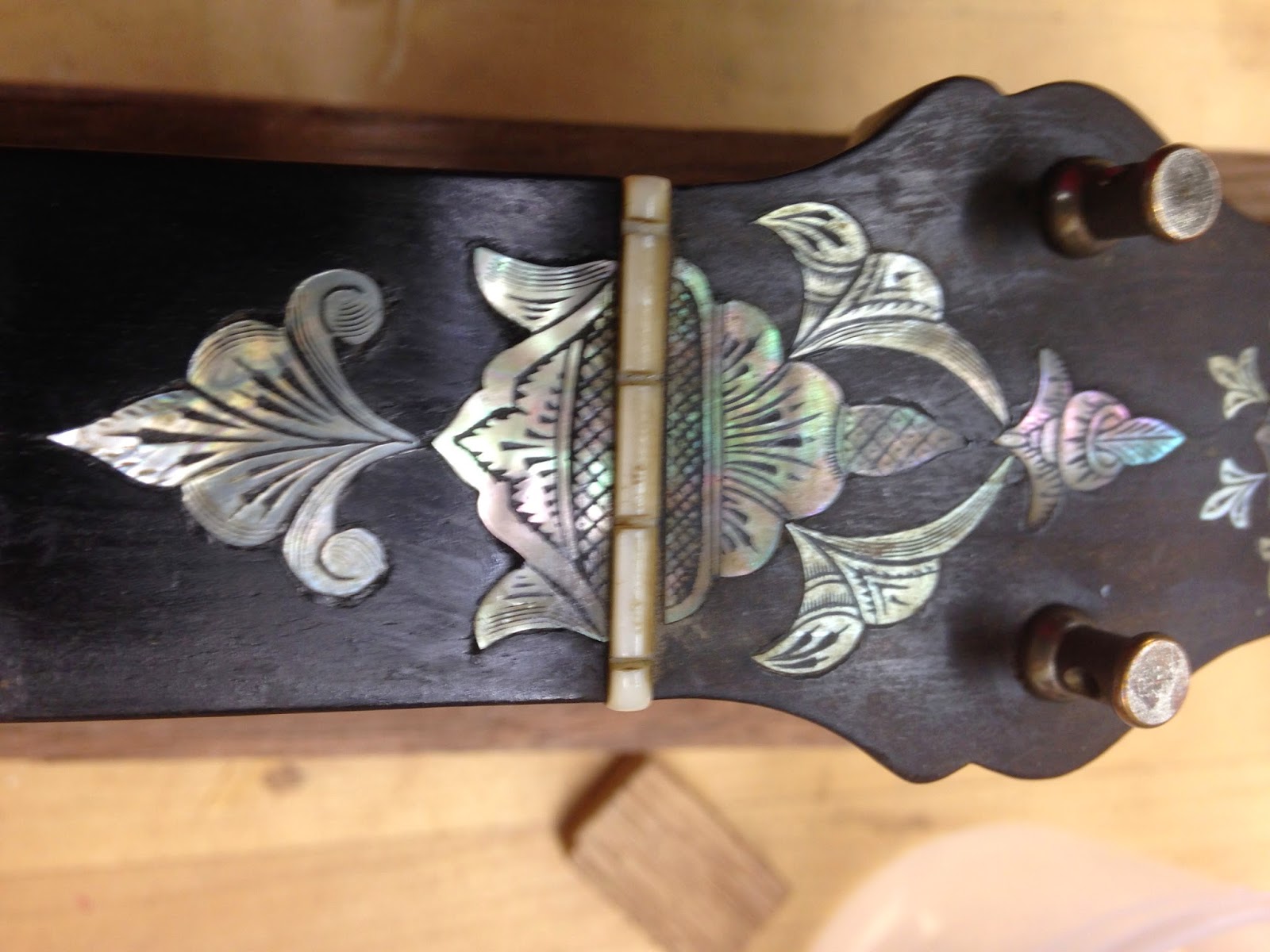 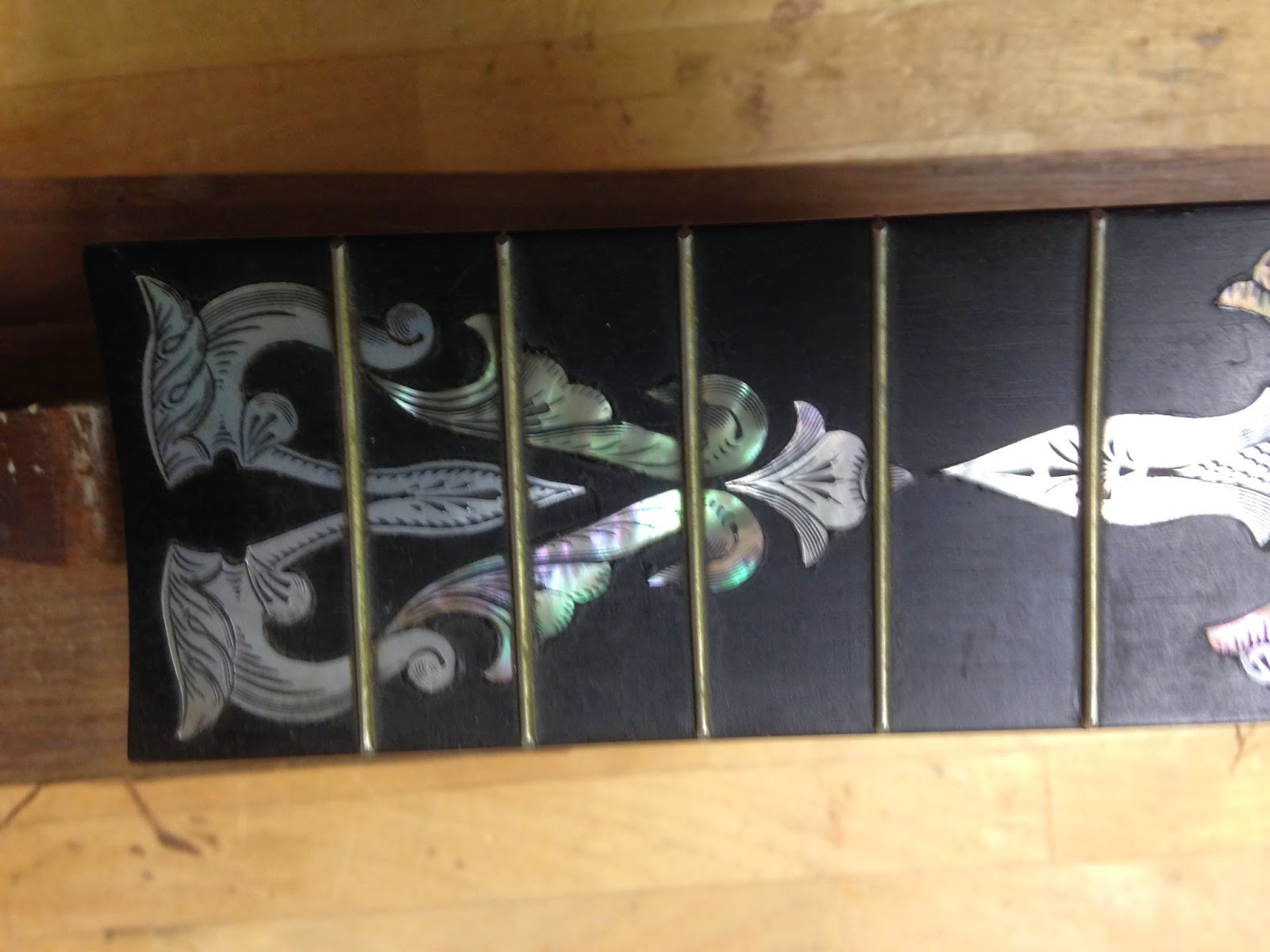 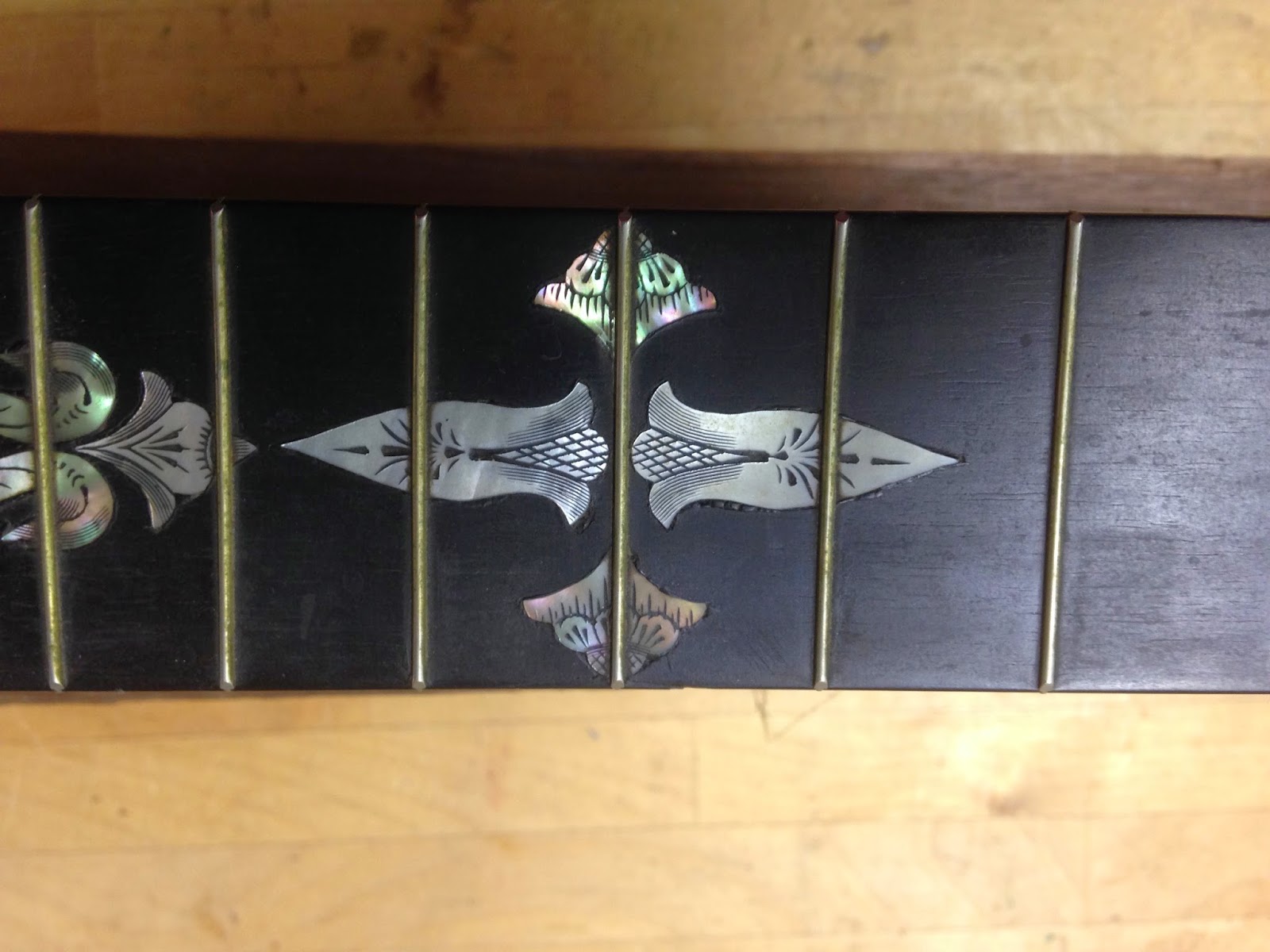 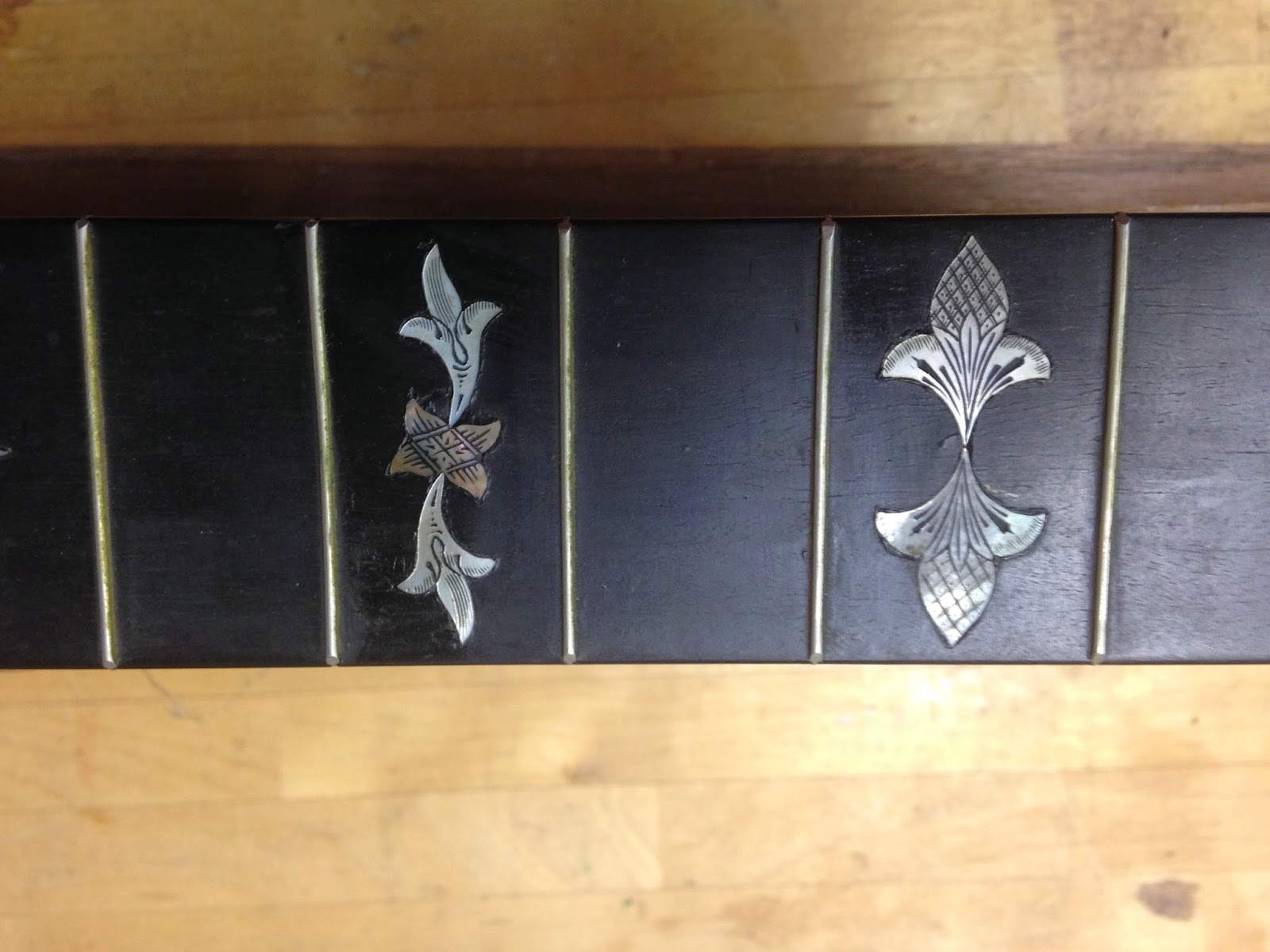 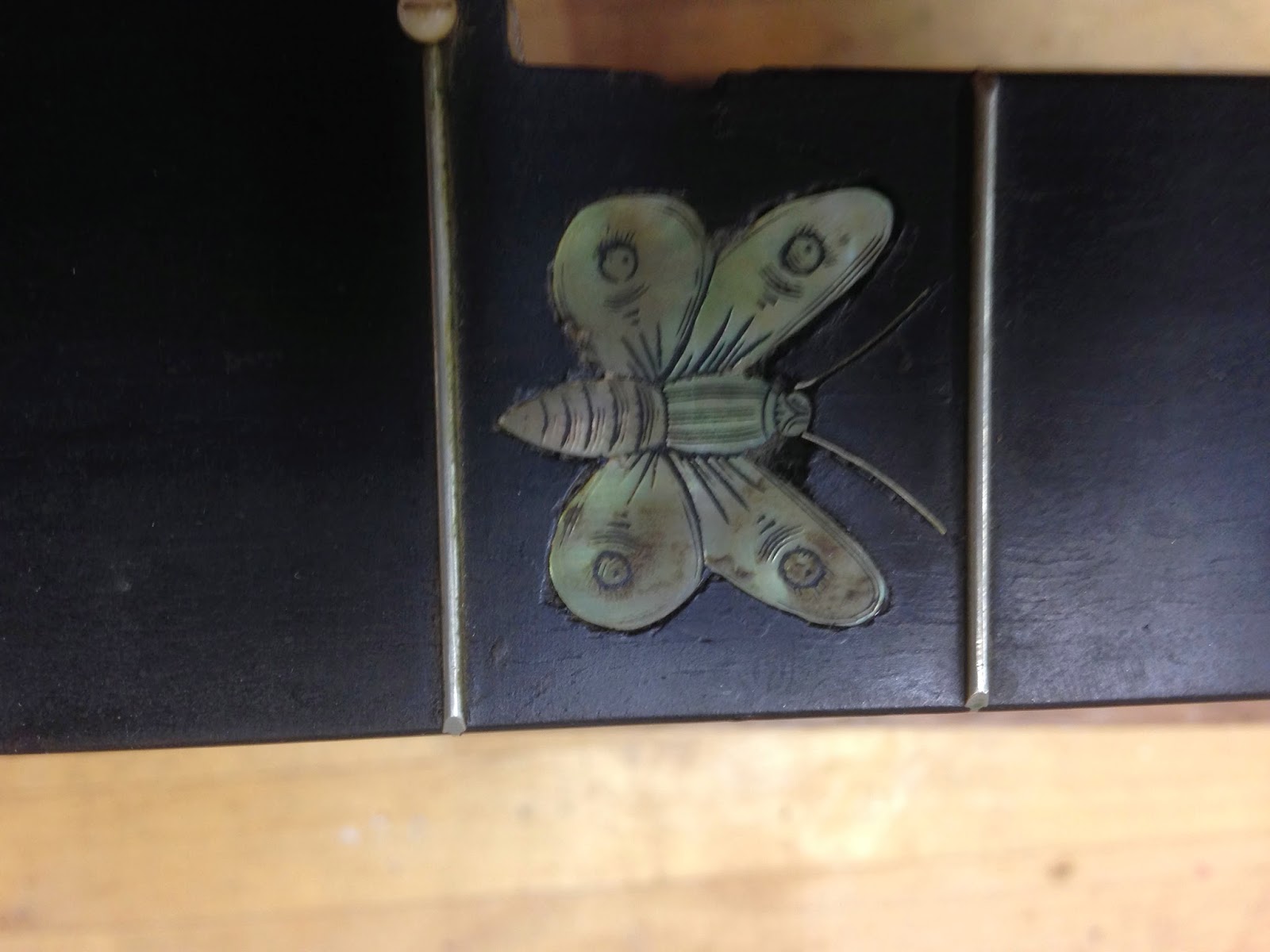 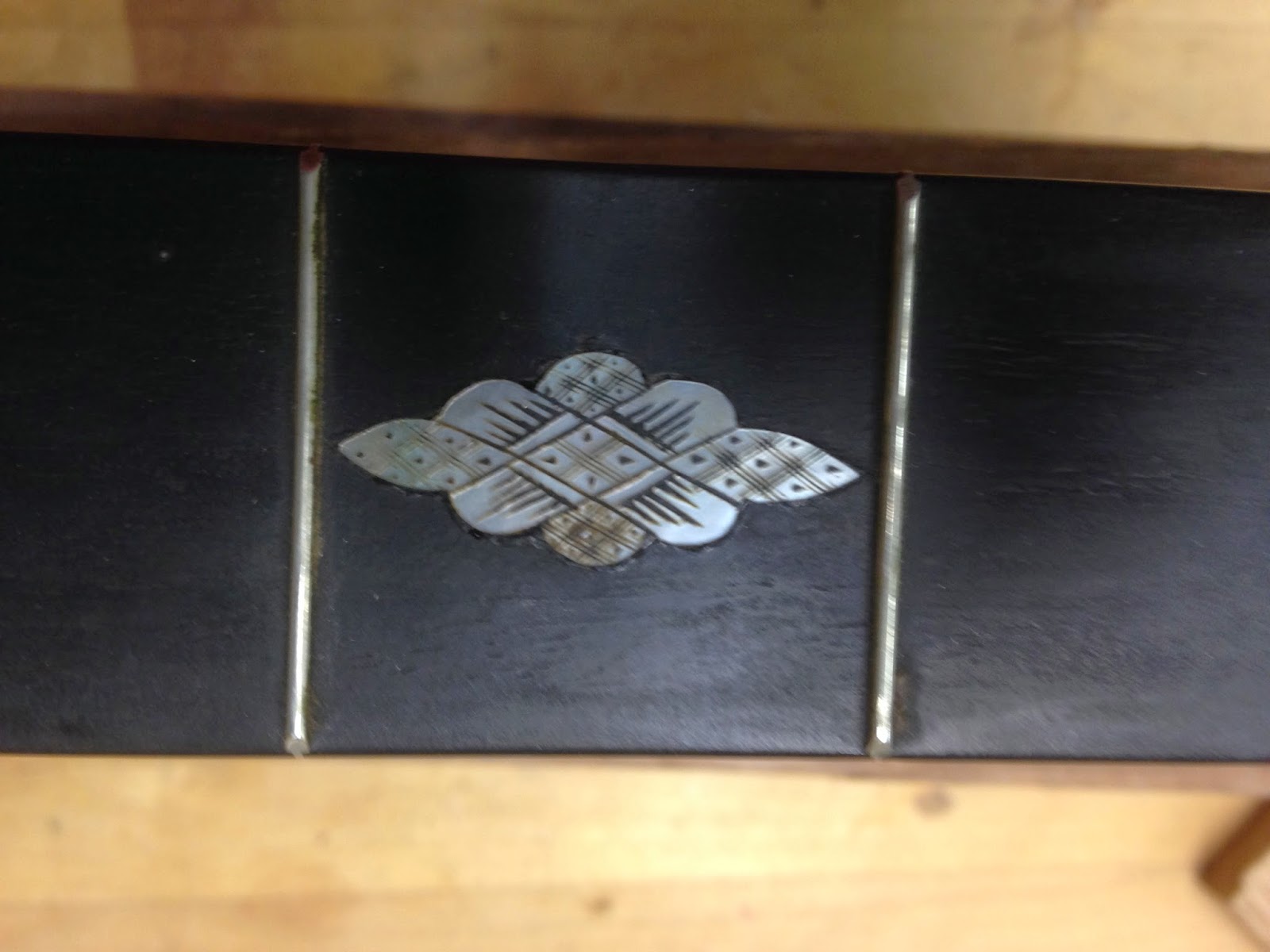 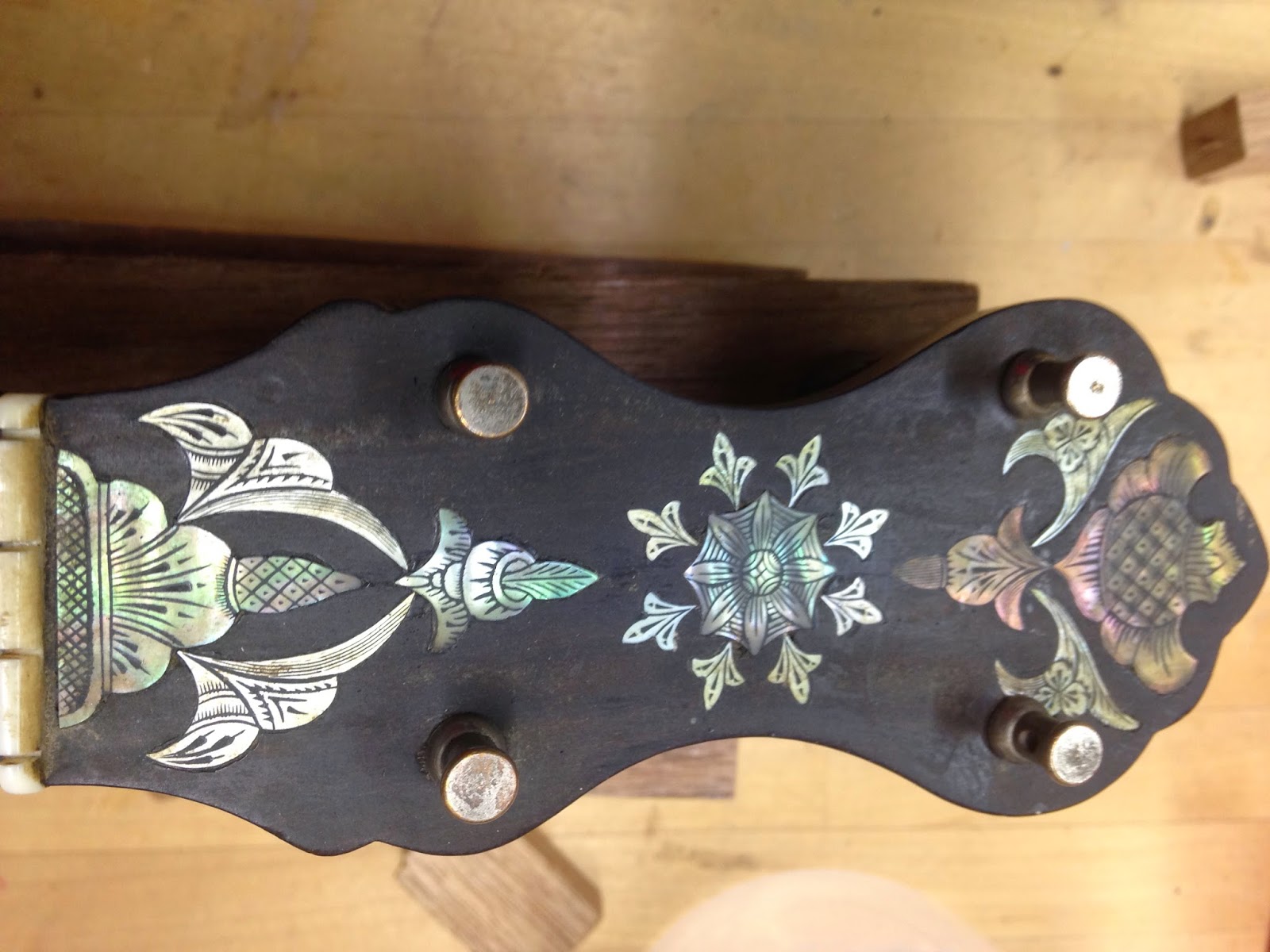 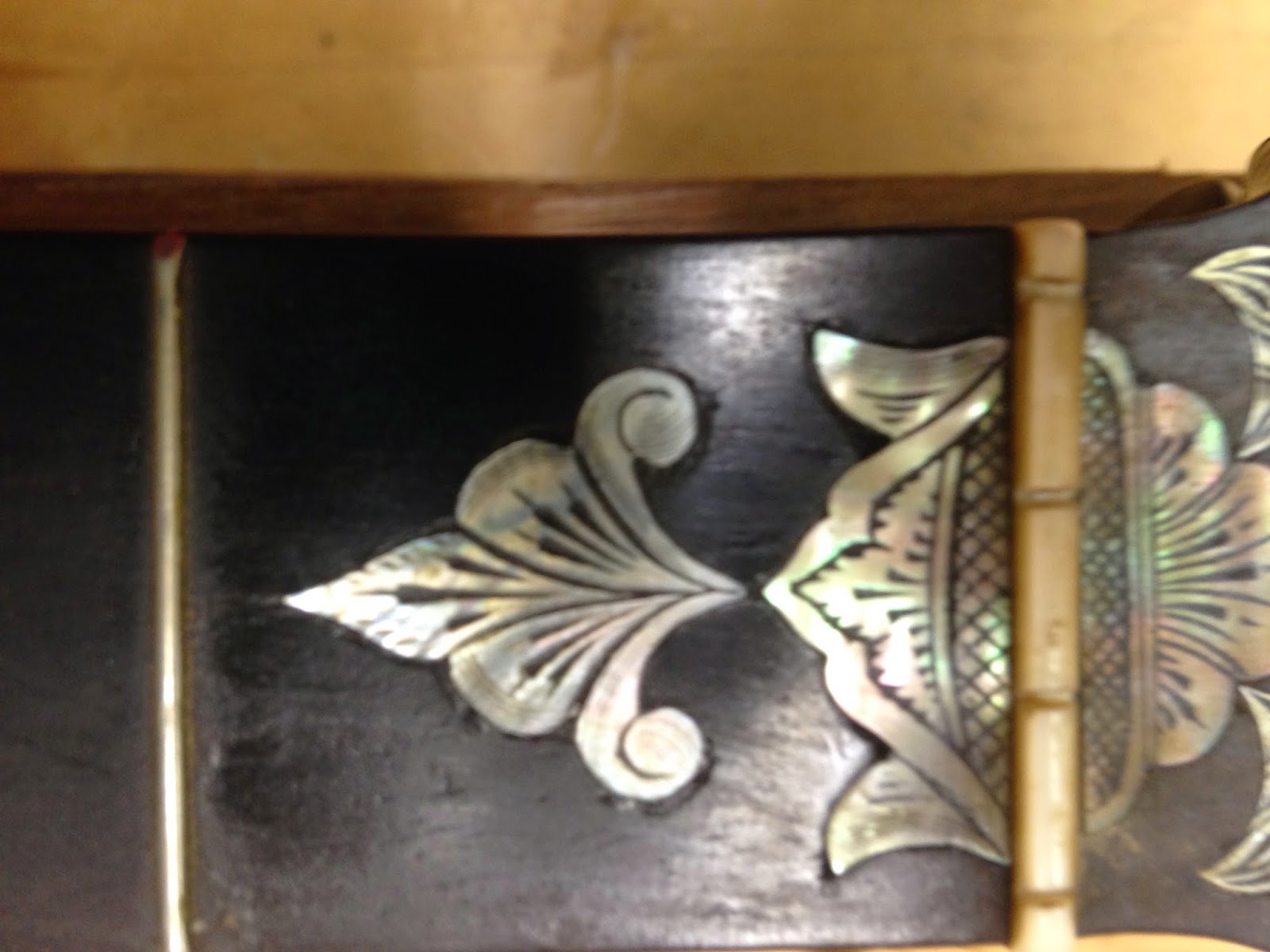 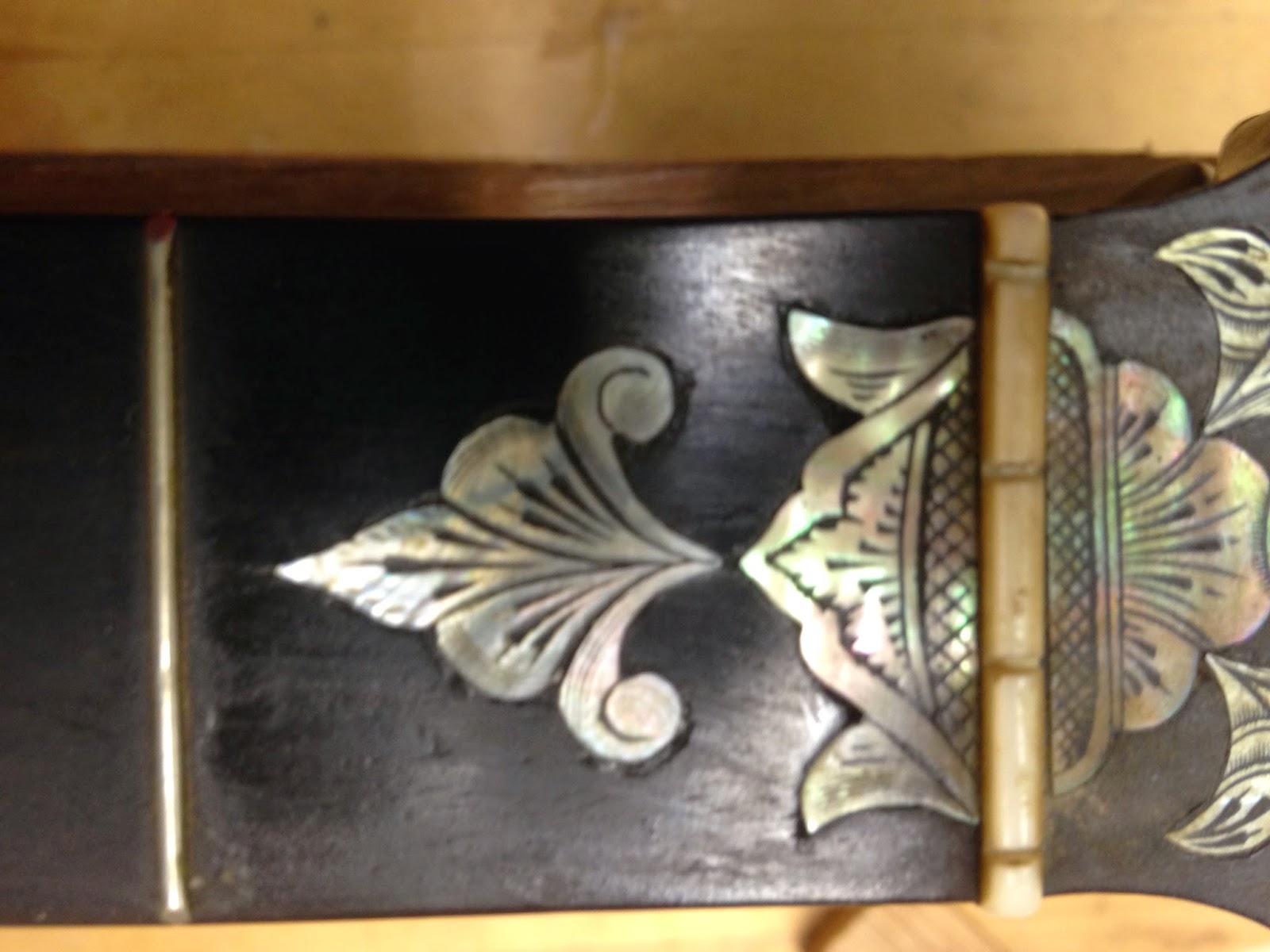 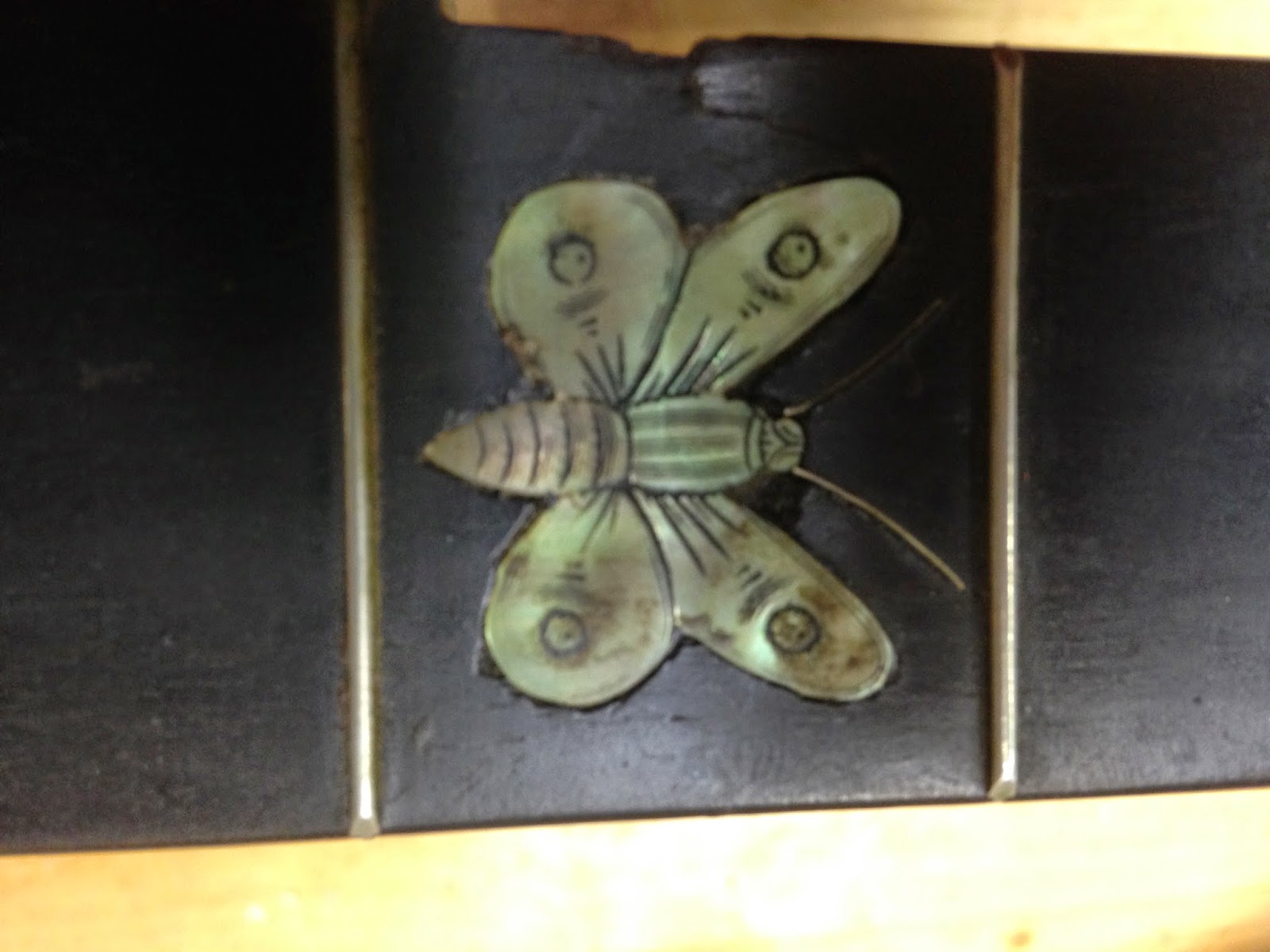 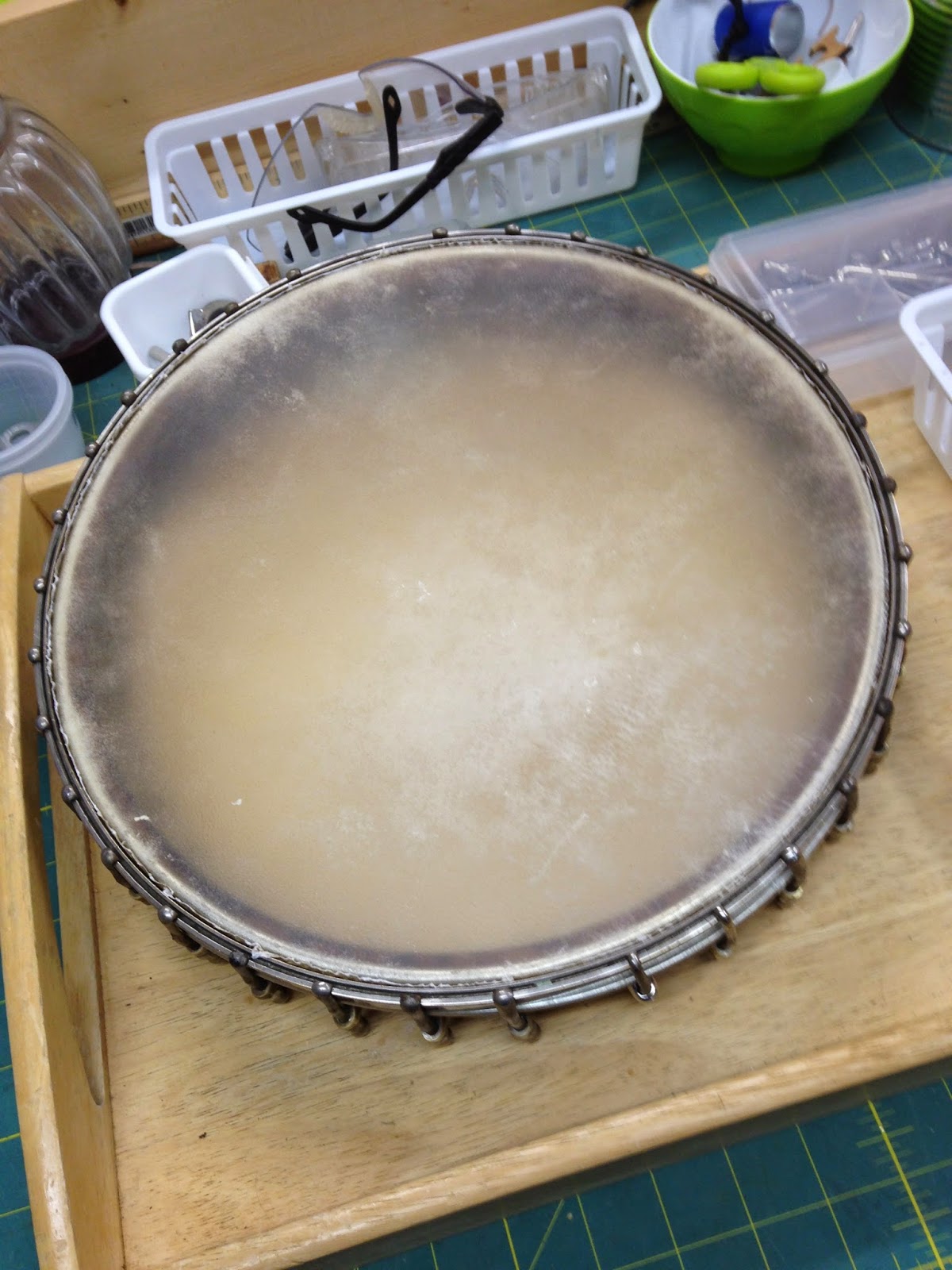 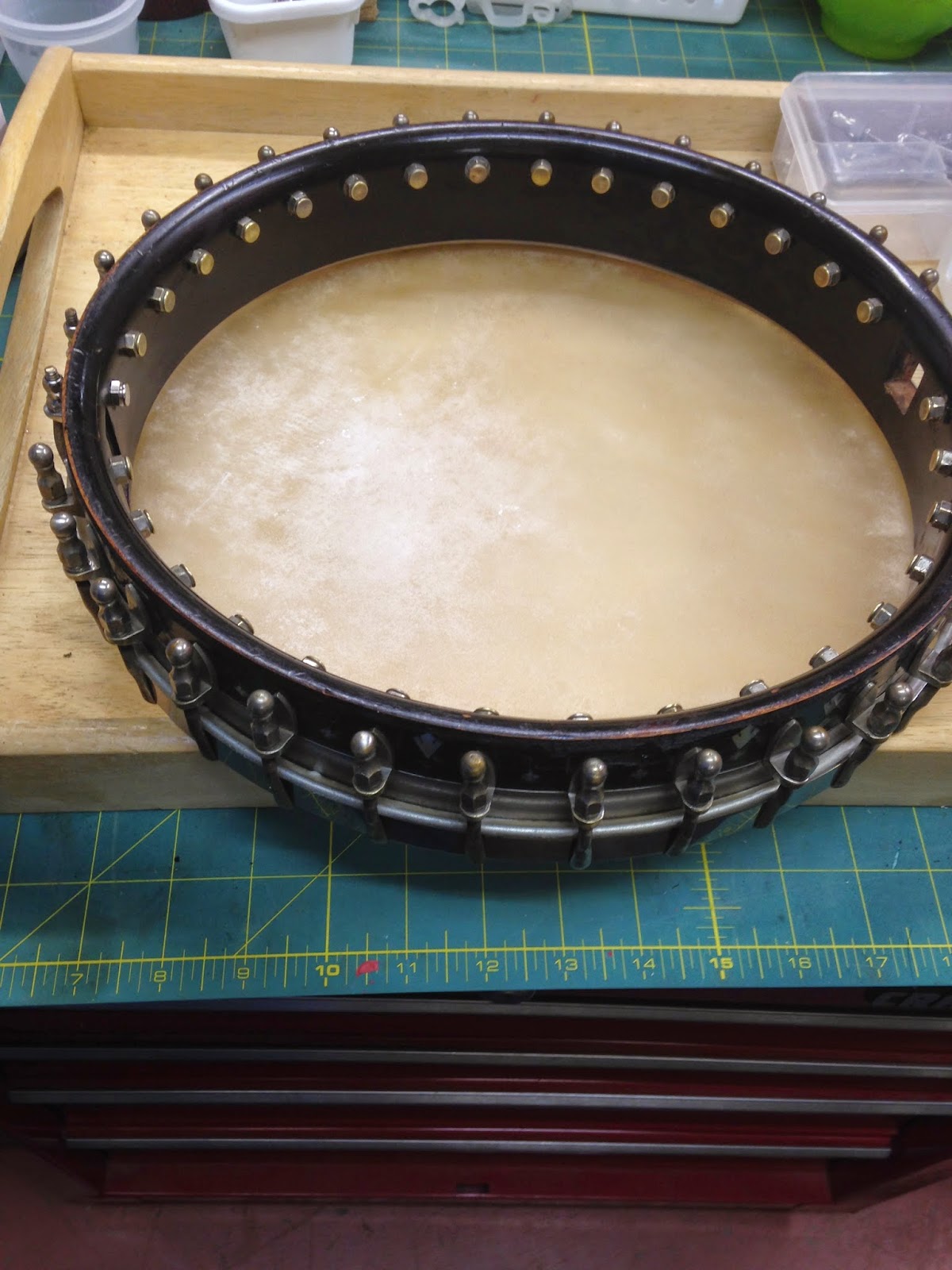 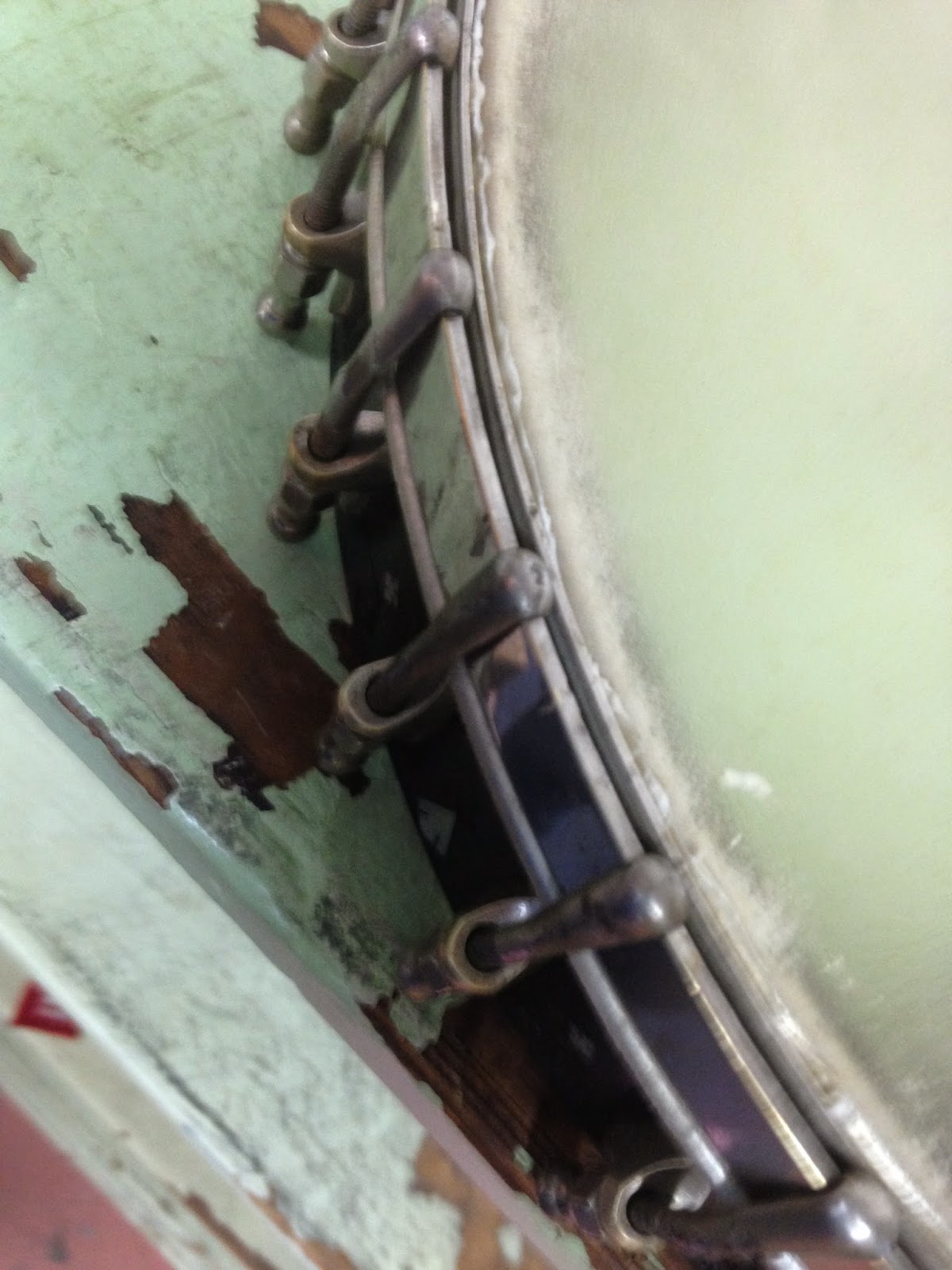 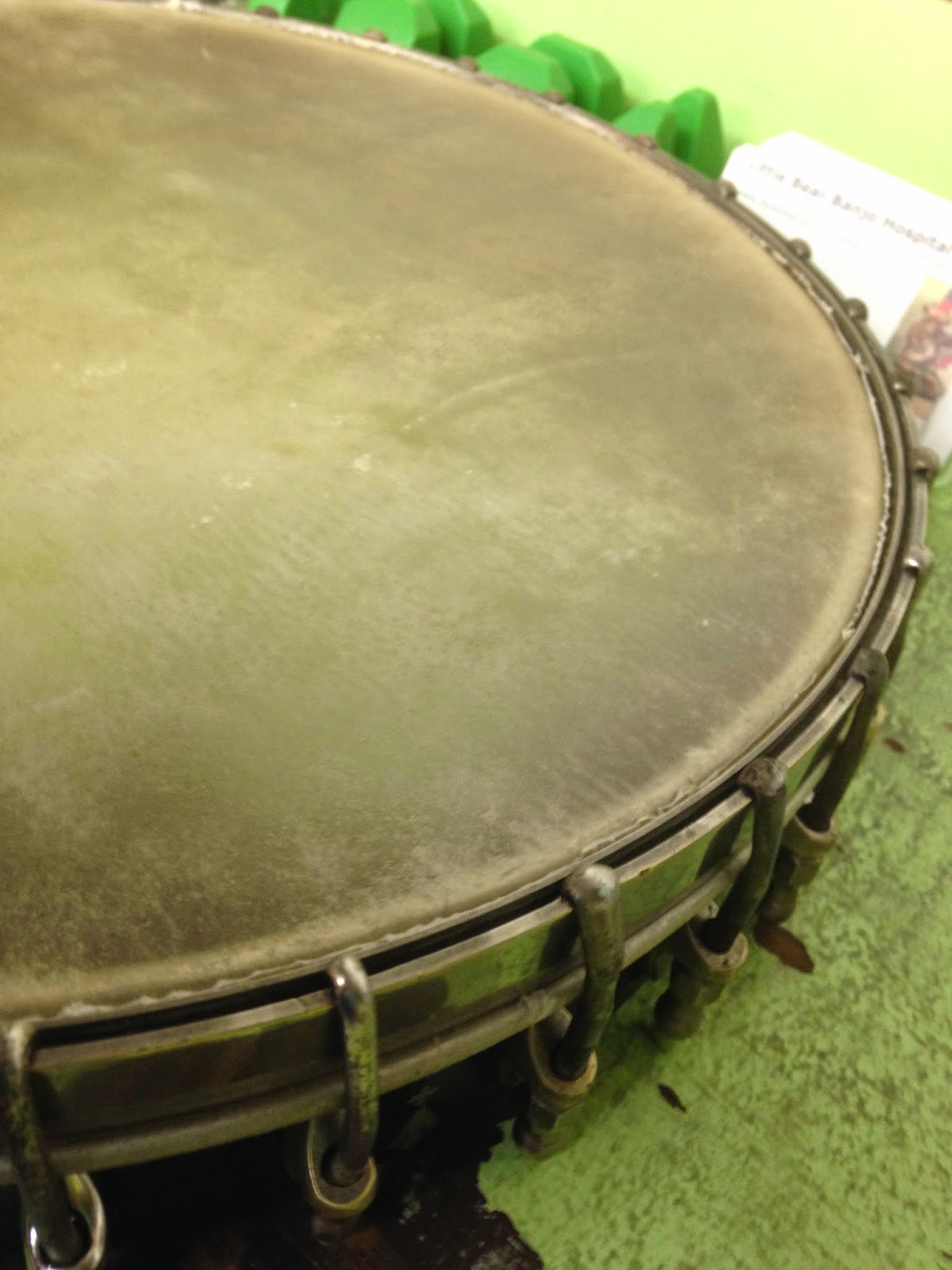 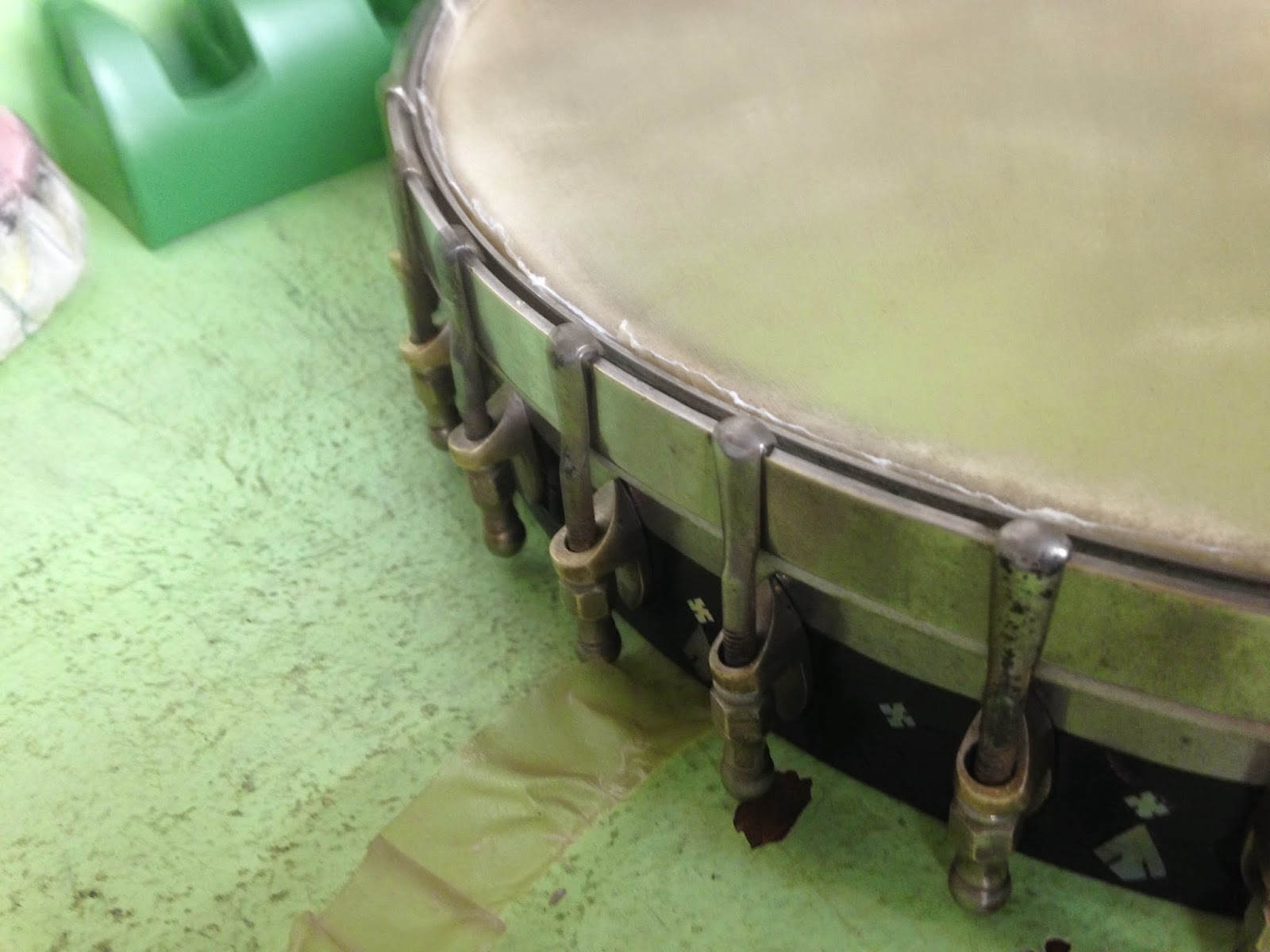 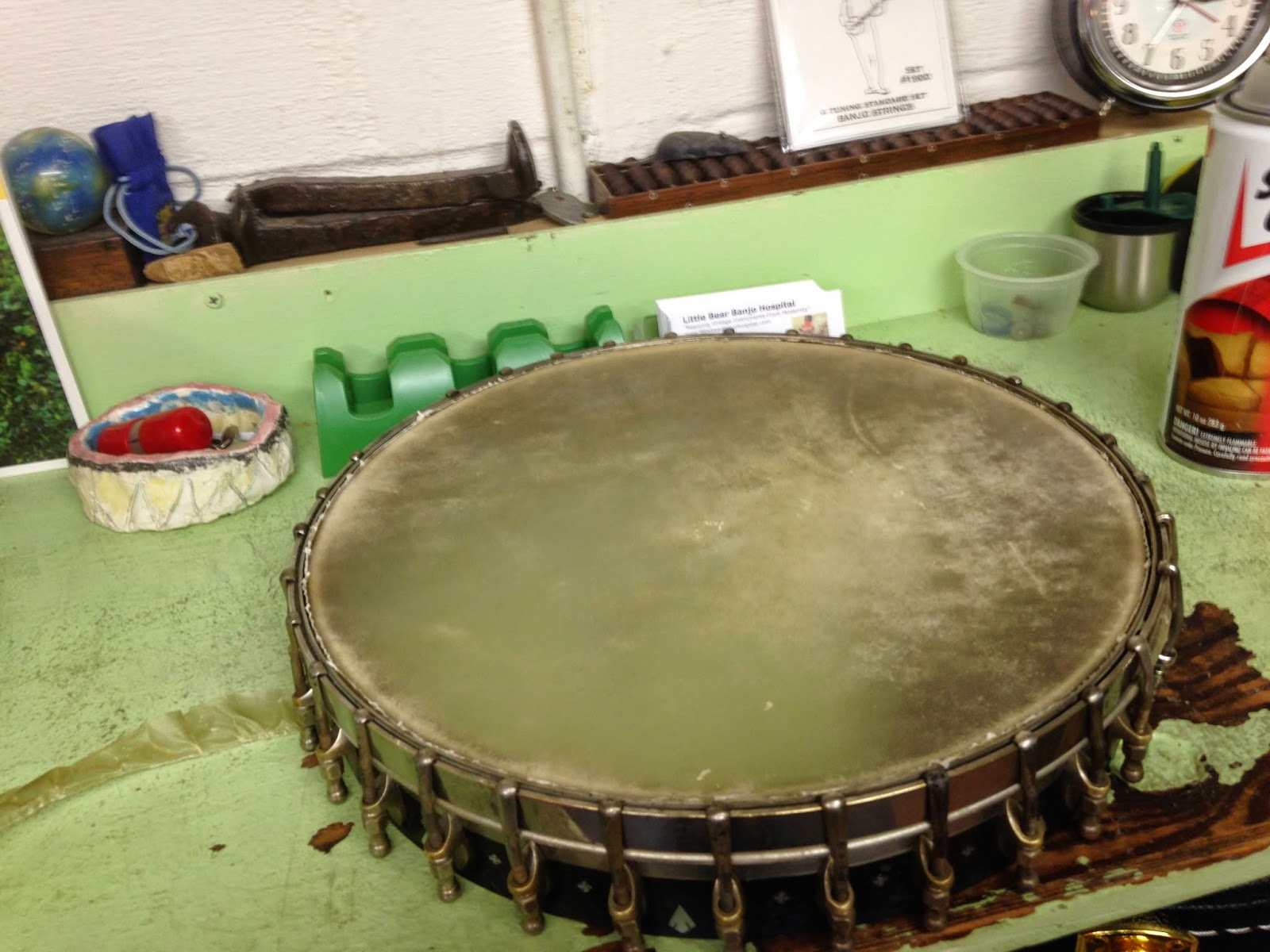 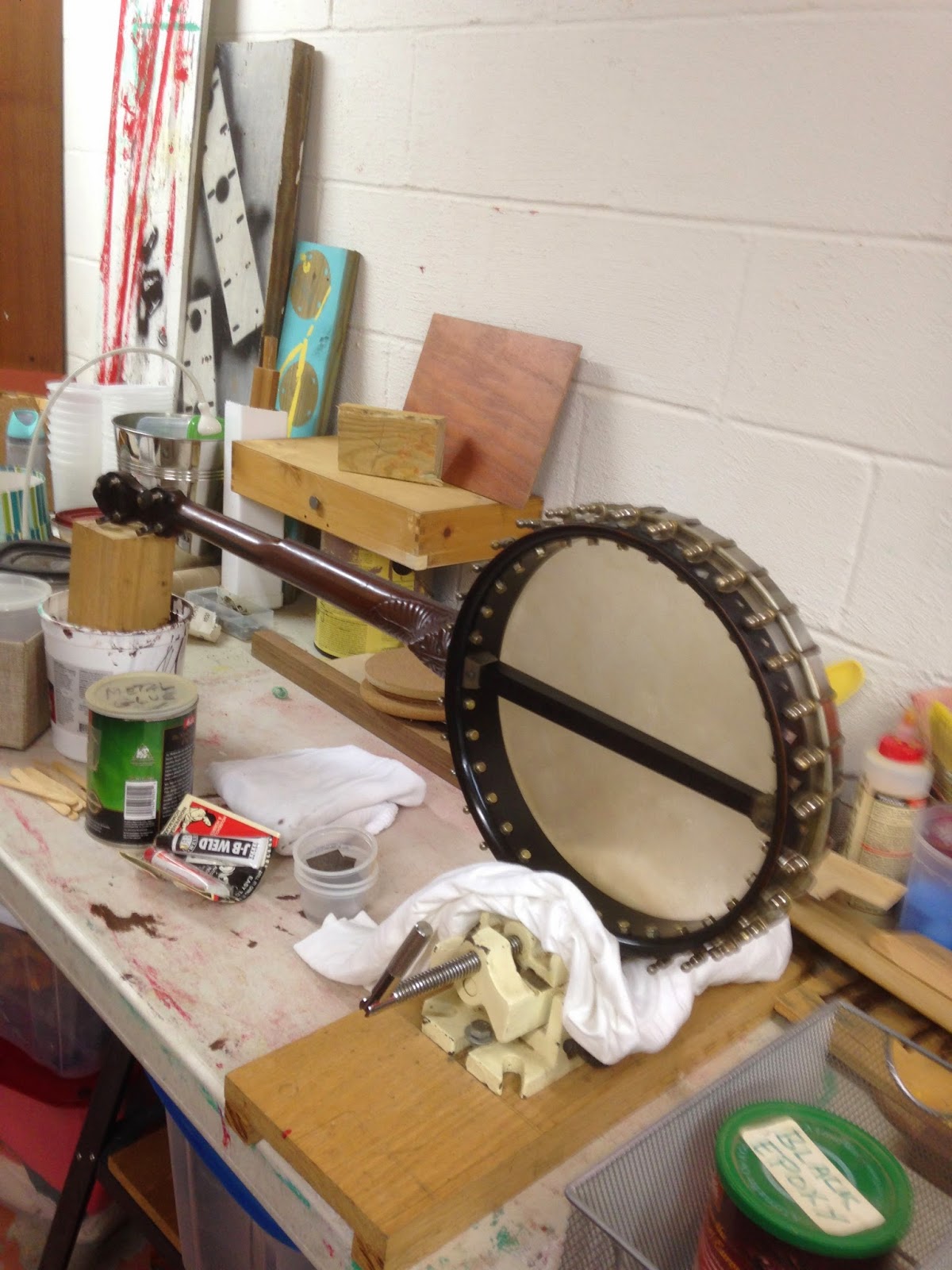 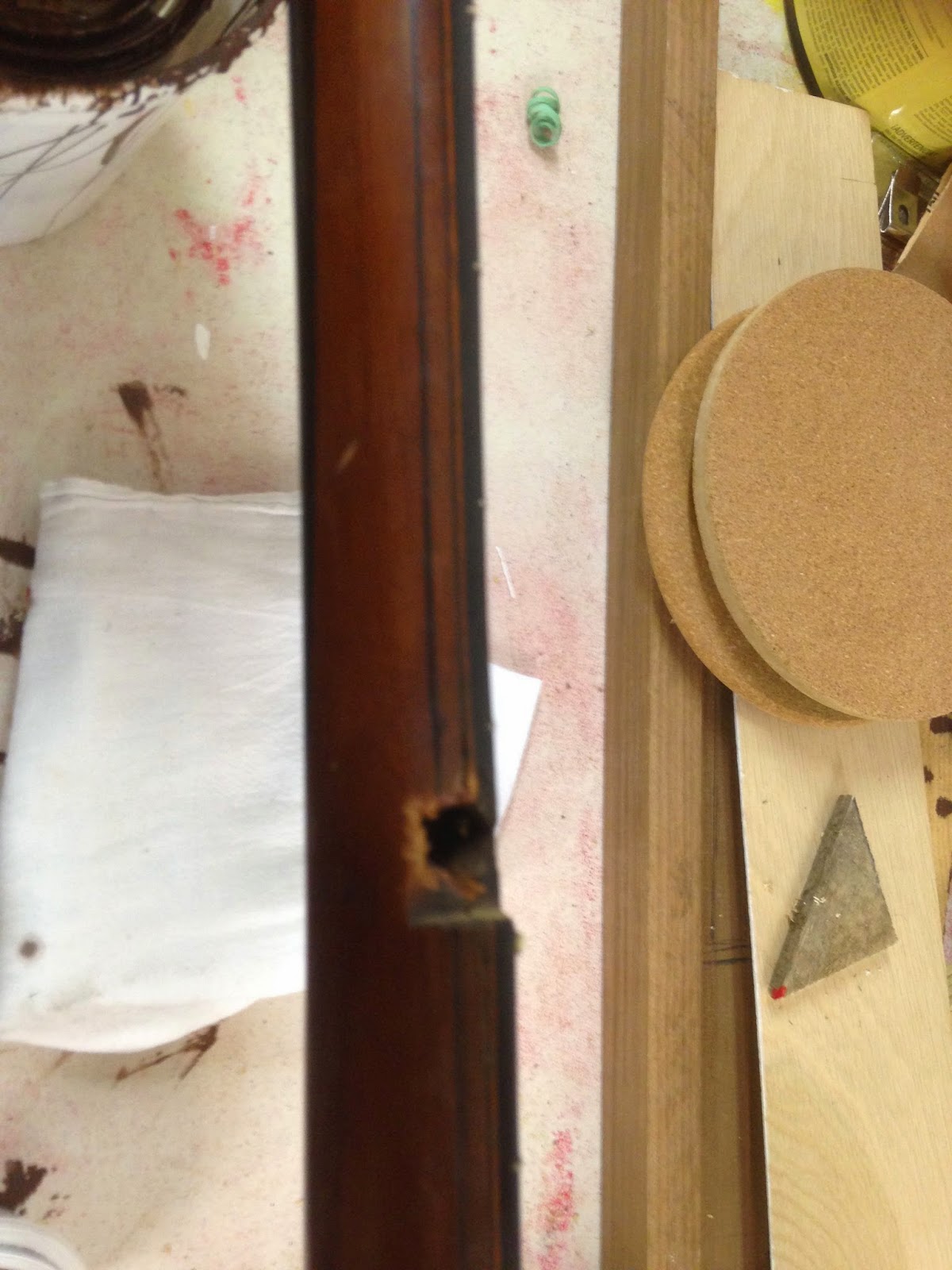 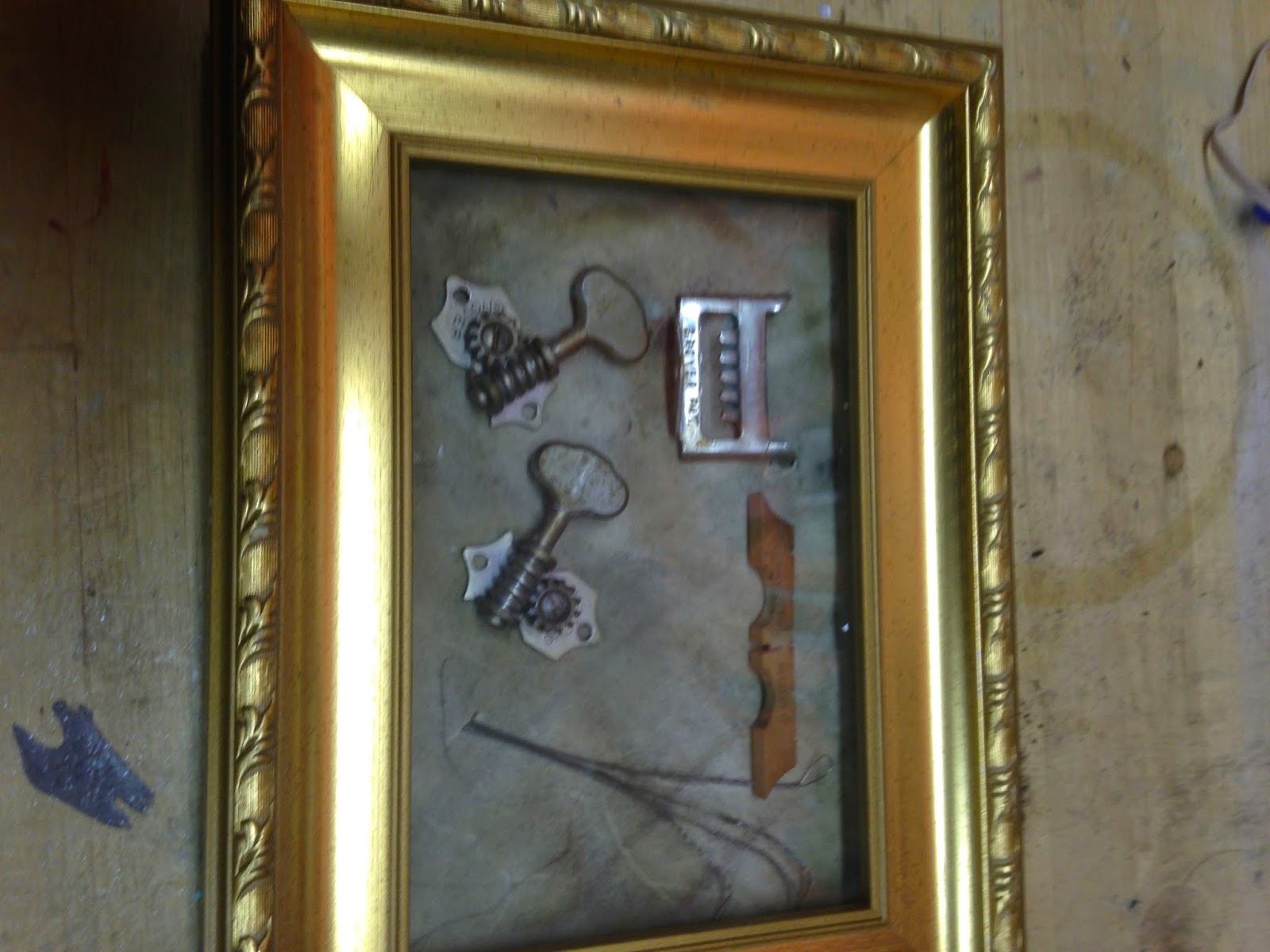