Yesterday, Saturday (26 April), I kicked off “Market Days,” an open-air vendor event hosted by my friend Lynne Breeden in the spacious parking lot adjacent to her store in Staunton, VA, called LTD7.
http://www.ltd7online.com/

I was joined by Scott Volles from Gainseville, VA, who came down for the day to visit Staunton on the occasion of “Bridge Day,” the second anniversary of the reopening of the historic Sears Bridge in the wharf area of town, connecting the wharf to the Sears Hill area over the AMTRAK station.  http://www.bridgedaystaunton.org/

I met Scott when he came into Little Bear Banjo Hospital with his tenor banjo, a Vega Style R WL pot joined to a sturdy neck of uncertain parentage, for repairs and an overhaul.  Scott has performed with the Irish bands "The Shebeens" and "Half Seas Over" who plays guitar, mandolin, Bodhran drum, and whistles to perform.  An Irish Session player, he uses Irish flute, whistles, Irish banjo and mandolin to play Reels, Jigs, Polkas and Aires.

We had never played together before.  We exchanged set lists – mine was a half page of tune names.  His was three pages in length.  I knew I’d be sitting down with a Real Musician, and figured I’d be in for a run for my money.
http://theliltingbanshee.com/

Scott has a great, sturdy and vigorous voice, and a very fine accompaniment playing style.  He hauled along some whistles, a harmonica, an octave mandolin, a nice Martin guitar, and a mandolin, his Bodhran – I got a five-minute lesson on how to make one of those things work and I’m now tempted to give it a whirl!

We compared notes, searched for some common ground, and traded tunes for two hours at this open air market event.

I have done only a few of these since retiring to Staunton in late 2010, and I remain wary of my staying power.  I start off strong.  I can hear the banjo, and catch the goings on out of a corner of my eye.  I’m not good yet at splitting my concentration between the work of playing the banjo and acknowledging people who stroll by, stop to listen, and maybe offer some words of greeting.  Scott has been busking for eons, and assured me that it comes with practice and time.

At some point, maybe halfway through an event, as the din picks up and the bustle of activity takes on a pulse of its own, I loose track of the banjo, have trouble hearing myself, and begin to wonder whether the thing has gone dead – so it was nice to have a partner to remind me that the banjo was ringing out clearly, and that I was on the right basic musical trajectory in pairing off with him on a wide range of tunes.

He was musically clever and quick enough, and familiar with basic Old Time tunes and styles, to figure out the chording on guitar to go with some of the tunes I played:  Waynesboro, Old Cripple Creek, Barlow Knife, Boatman, Abe’s Retreat, Cluck Old Hen, June Apple, Around the Horn, Hop High Ladies, Red Wing, Come Back Boys Let’s Feed The Horses.

Scott has an admirable easy way with such events.  He has a special touch with children who happen by.  He invites them to grab the Bodhran and pound along with a tune, instructing them to watch his right foot and smack at the drum in time with him.  And he gets them singing along, filling in the last word to a rhyming tune he sings with a children’s theme.

We were joined during the last half hour by Scott’s friend from northern Virginia and busking partner Michael Francis Haley, a super accomplished classical fiddler who plays old time, celtic and anything else thrown his way.
http://www.michaelfrancishaley.com/

Michael and I found common ground playing Waynesboro, Angeline the Baker, Round the Horn, Turkey in the Straw, Cripple Creek.

Ed’s just getting the store under way after closing it down for a year.  We played amid some impressive pickings that Ed gets from trolling auctions and other sources of great old furniture and household items. Scott, Michael and I went over the common ground we established, and Scott and Michael covered some of their standards.  I got to hear Michael do an astonishing Ashoken Farewell.

And I picked up a new banjo student.  A women came over, asked whether I repair old banjos, told me about her Dad’s banjo that needed some work, and confessed to the desire to learn some picking!!

At the risk of making this blog entirely too long, I’ve got to add one more point.

As we were setting up at Lynne Breedon’s Market Day, I noticed a vendor tent across from the musician’s stand and was mesmerized by the artwork of a young local artist whose sister told me I was looking at the work of Kaylor Vaughn Cline.

Ms Cline had not yet arrived at the event, so I did not get to meet her, but her sister and a male relative enthusiastically guided me through some of her work and it was startling vivid, fluid and effective in capturing movement and moments in time – I especially liked a portrait of a Bob Marley sort of musician caught in a vigorous musical moment.

I learned that Ms Kaylor Vaughn Cline is a native of Staunton.  Lynne Breeden told me that she specializes in drawing and painting, graduated with a Bachelor of Fine Arts from Radford University with a concentration in oil painting. She’s just 22 years old and already can cast an artistic spell.  Lynne’s FACEBOOK webpage says this:  “Her wide range in subject matter and painterly style embodies colorful artwork featuring animals, cityscapes, and portraits. Although painting is her central devotion, she enjoys exploring all outlets of creative expression. Her focus recently has expanded to include beadwork and up-cycling furniture. Currently, Kaylor is a preschool teacher at Bears and Blankets Academy of Early Learning in Staunton, VA. “

Ms. Vaughn Cline’s work is vibrant, impressive, and worth seeing.  I snipped this from Lynne’s web page:


Thanks for visiting my blog. 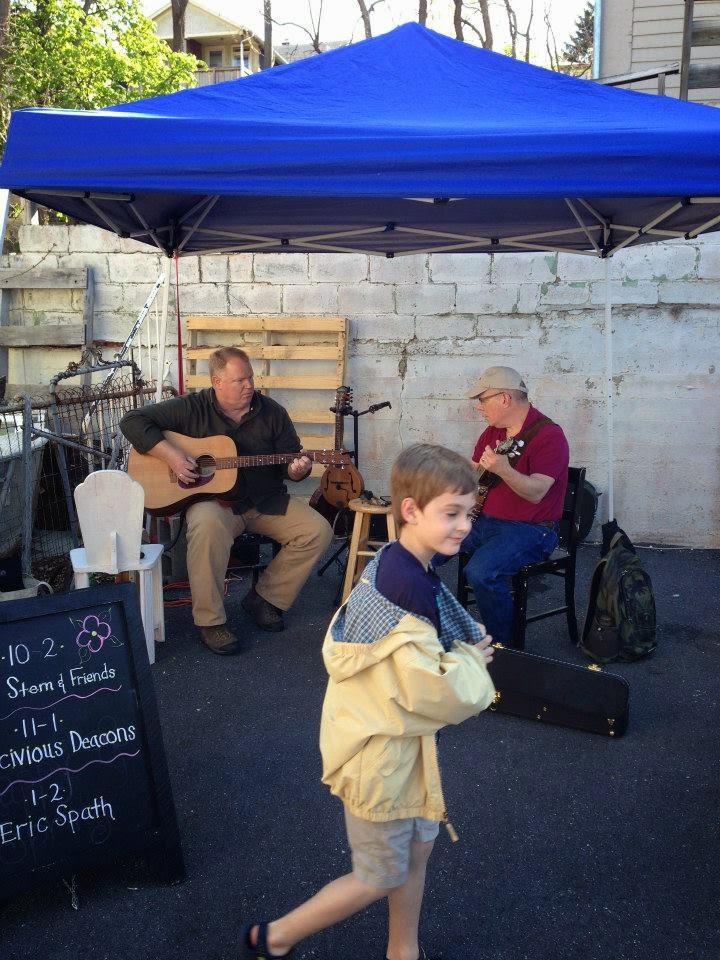