You Have Some Case

Sometimes, clients walk in with banjos for repair that come sheathed in some really very fundamental cases.  I mean bottom feeder cases that have been ridden hard and put away wet, sometimes literally.  These old cases are visibly worn to the bone, often structurally unsound, and contain some of the most pungent mold-bearing fabrics in the interior.

Yet, at times, clients would like to see something done to extend the life of these things either because both a banjo repair and a new case are not economically possible, or because the case as frazzled as it is bears some intrinsic value -- perhaps it came with the banjo, handed down from one generation to the next – or because an old and rejuvenated banjo ought not to be housed in a modern case.

Over the last four or five years I’ve tinkered with some ways to extend the life of these badly beaten cases.  I’ve not focused on the hardware – locks and clasps and handles.  I’ve just fixed my attention on the interior lining and the exterior sheathing.  On old cases, frequently made of thin veneers of plywood, using mechanical interventions to secure the top to the sides -- screws or nails or other unique alternatives – is frequently not possible.  And using glue becomes a challenge because of the thin target presented by the thin wooden ply skeletons of these cases.

I just had one such case in the shop, and spent some time tinkering with it largely because it was intended to house a very nice plectrum.  I personally would have opted for a new case, or even a large paper bag, as an alternative to the case the banjo was contained in when it arrived in my shop.  But the owner wanted the case made sound and usable again.

I had to tear out the interior of the case, which was mottled and moldy and dirty and unpleasant.  I recommend doing this with a disposable face mask on to preserve some measure of distance from the spores and stuff that will rise out of the disintegrating material and the desiccated glue.  I secured the interior with Shiurtape, a metallic tape – see below – and began working on the lining for the interior using simple black cotton linen and foam. 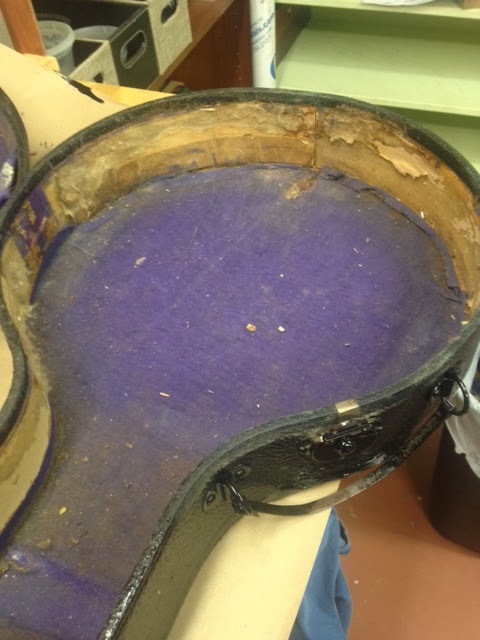 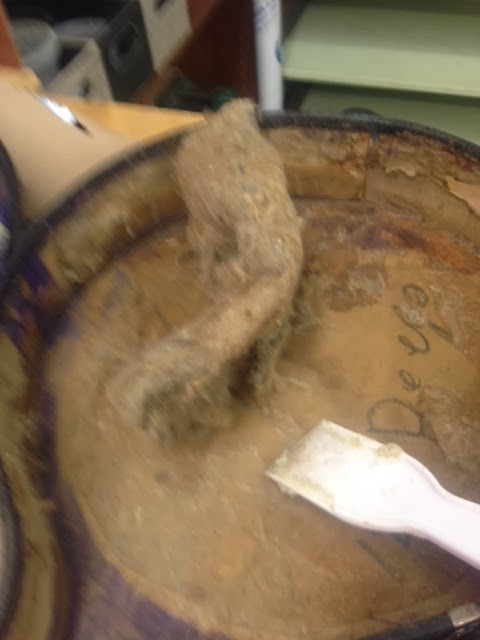 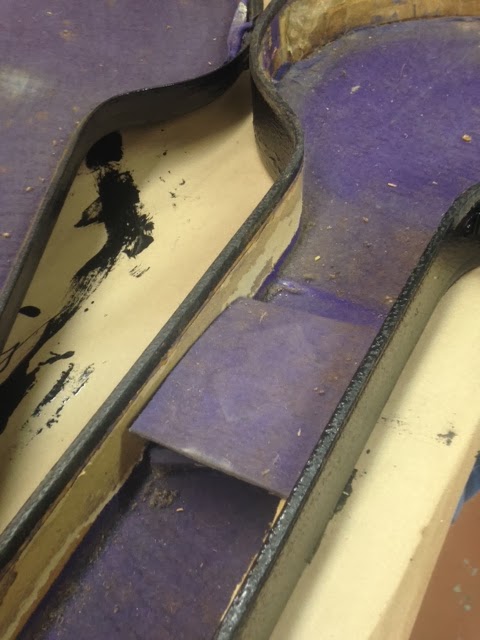 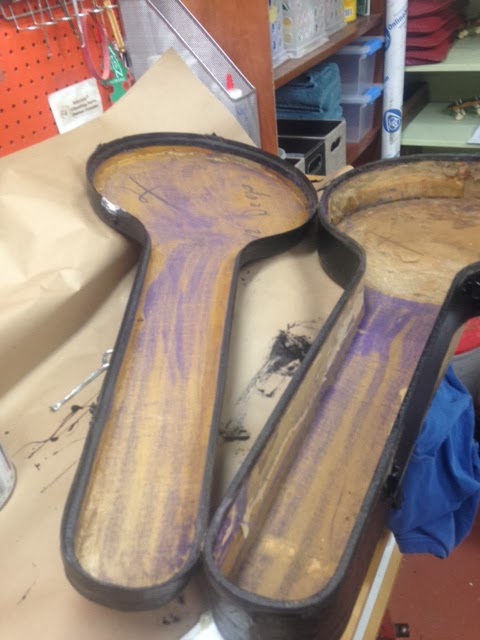 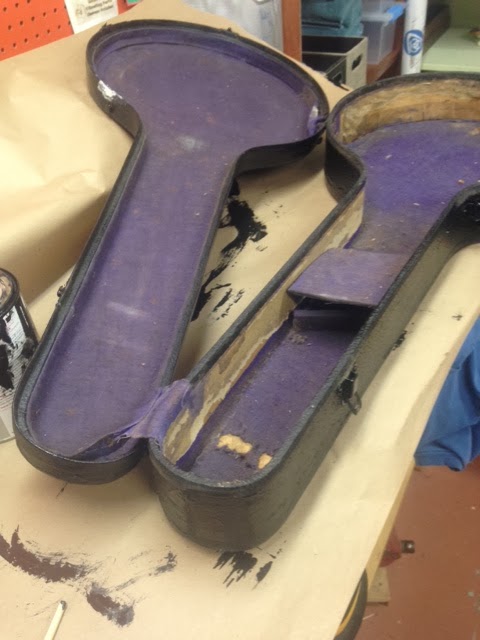 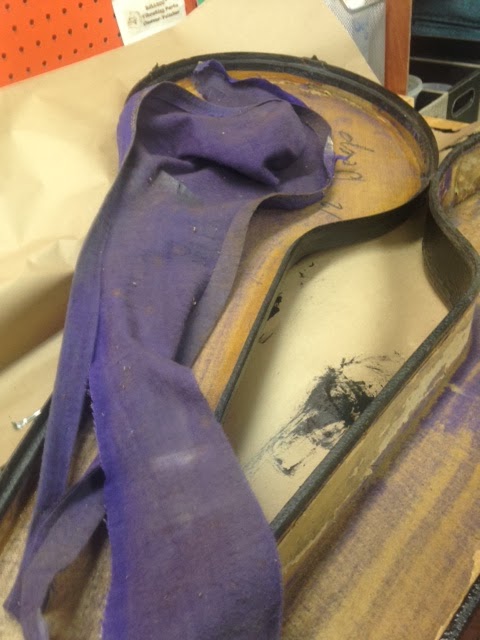 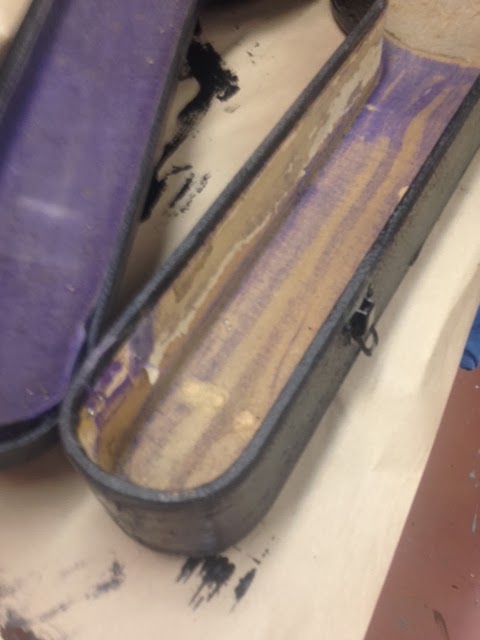 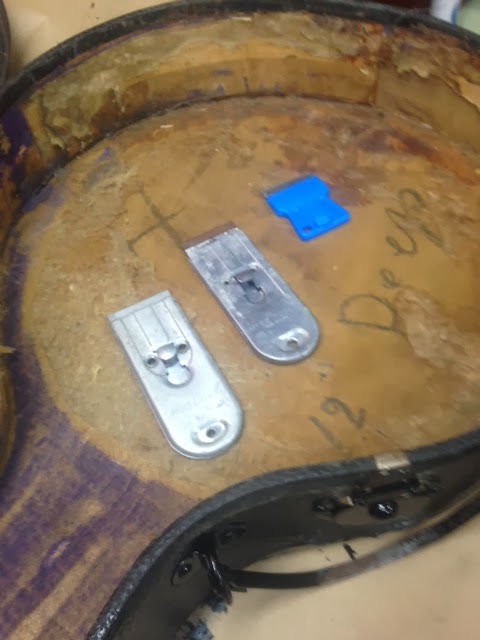 I used very small vintage metal screws to penetrate the plies and secure the top and bottom to the sides of the case.  If I ever do that again, I’ll probably use an angled wedge against the interior of the case as a way of getting the top and the sides to cling together, though that option might not work well if there is only a little bit of space to work with because adding wood might end up complicating the fit between the banjo and the case walls. 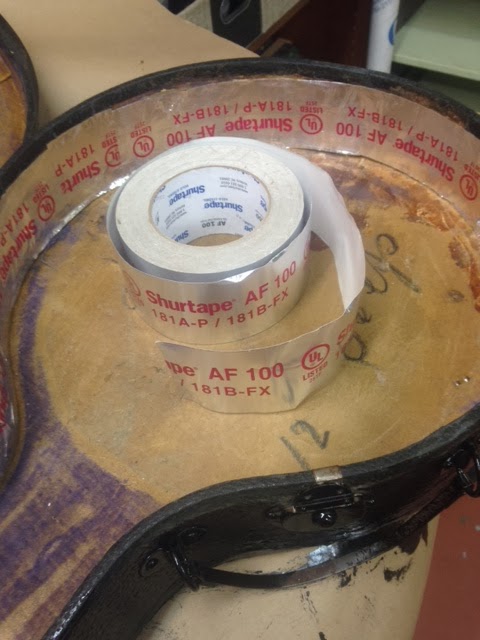 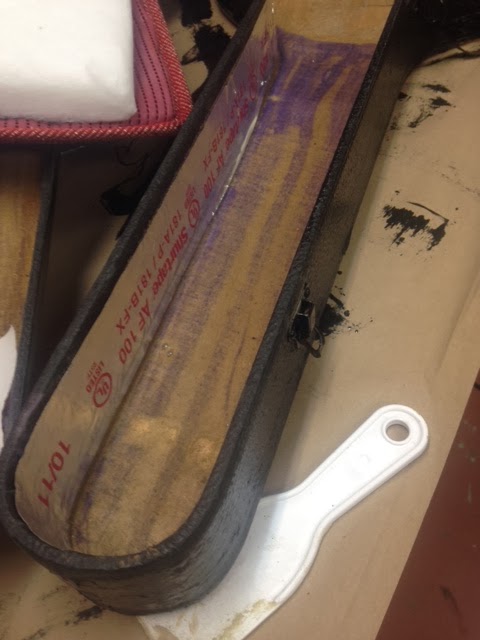 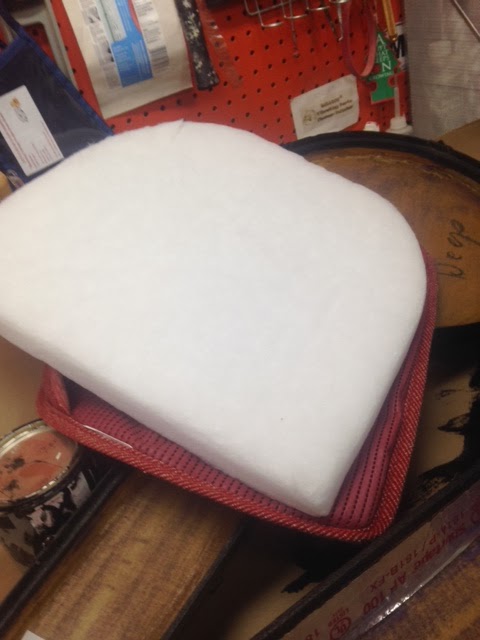 Once I had those screws secured, I experimented with Bondex, a flexible floor patch and leveler that has a long drying time.  That gave me the option of gluing the stuff up, and then removing and reseating screws, manipulating the plywood skeleton, clamping and re-shaping the thing until I managed to achieve some flexibility.

In the end, I probably did not need that much of a long drying time so I opted later in this drill for “Liquid Nails.”  I applied a caulk line of the substance to the outer edges of the case, troweled it into shape, and let it dry.  Then I took Shurtape, AF 100 UL-Listed 25TF – the sort of tape that one might rely on in securing the aluminum duct system to one’s clothes drier and washing machine.  Commercial metallic tape comes in grades, and the Shurtape has more holding power than the budget stuff available in most hardware stores.  After the caulk line of Liquid Nails dried, I taped over it, cutting strips of tape, and slicing the strips so that they could be applied in a way than angled over one another for better coverage.  I pressed hard on the tape to activate the adhesive, then in a bit of overkill I applied a troweled layer of Liquid Nails to seal the metallic tape.  After that dried, I layered on some black Rustoleum on the exterior. 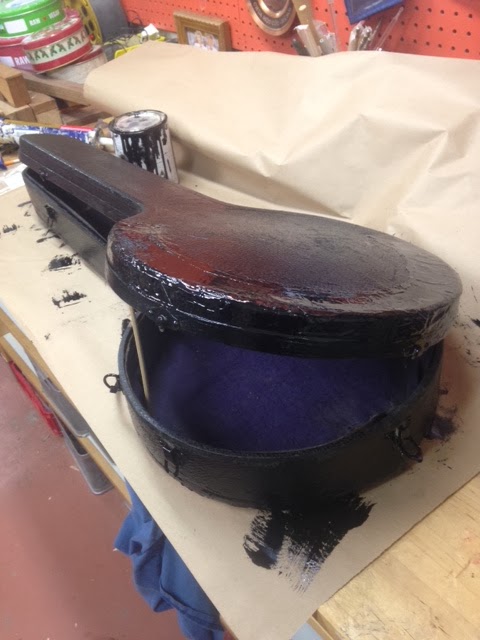 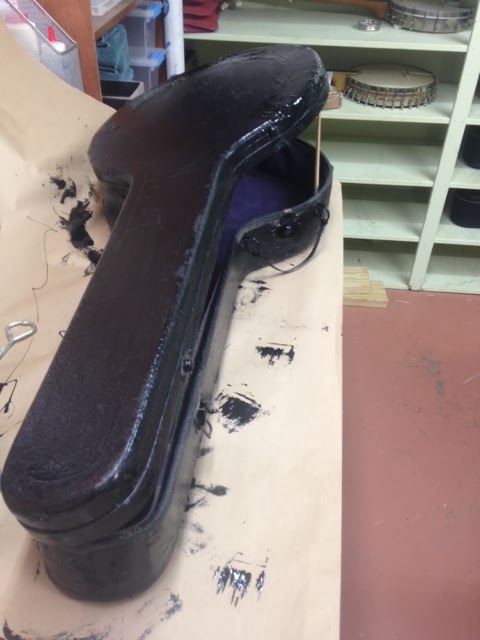 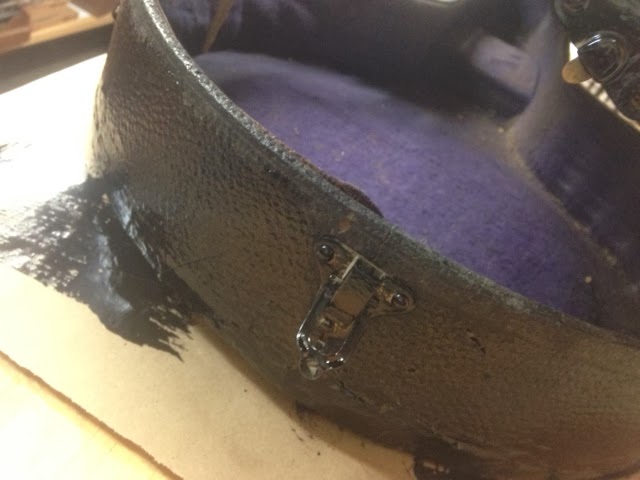 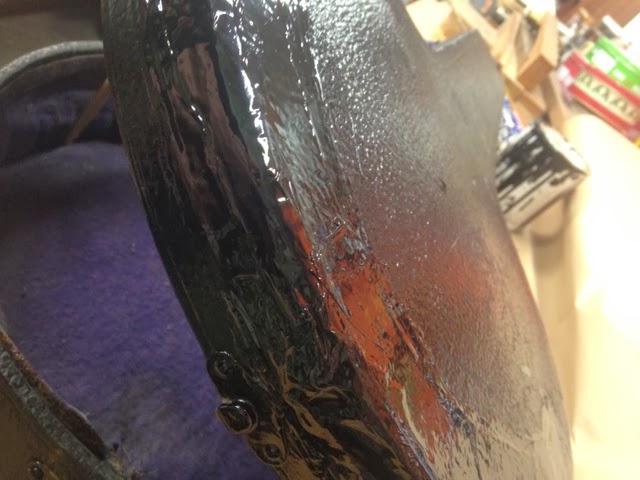 That dried smooth over the surface of the old case, meaning that the painted area did not match the “alligatored” look of old cases.  I grabbed a spray can of Rus-oleum black paint, satin finish, applied that on top of the Rust-oleum.   From prior, and unfortunate experience, I knew that the sprayed Rust-oleu would pucker and bubble in thin, crackled lines over the black paint.   It matched the surface texture of the case perfectly. 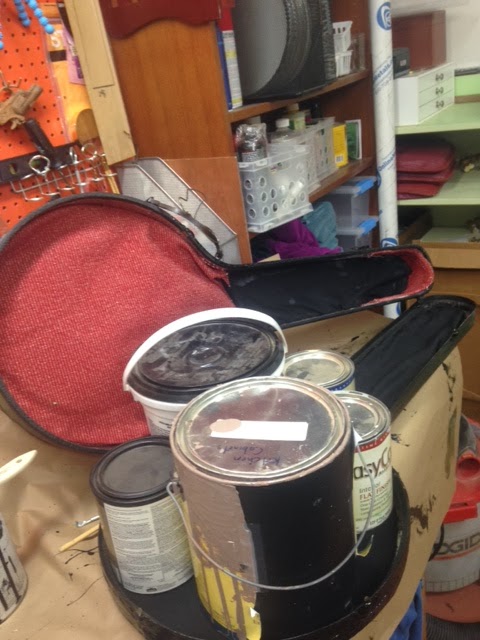 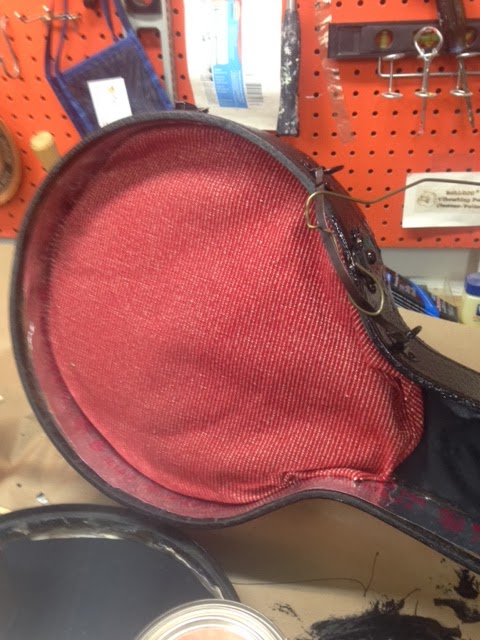 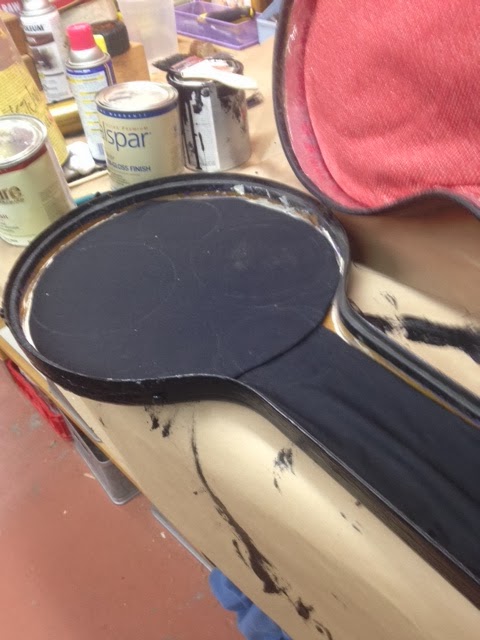 This isn’t my favorite kind of work, though it does become challenging and interesting, and it does represent another kind of problem solving, which in the end is the what keeps banjo repair work intriguing and makes this a worthwhile sport.