Thoughts After A Second Banjo Gig

I did my second store based banjo gig in Staunton VA on 8 November, in the evening, as part of a city-wide promotion of business – and holiday buying.   It was the “Sparkles and Sweets” evening.  I played for about 70-80 minutes at my friend Lynne’s store, LTD7.  Here's the promotional flyer:

This time the gig was inside the store, so it was much warmer than the open air market I played at (and blogged about) a few weeks ago.  The second event led me to speculate more about the whole performance thing – if sitting around and playing to shoppers intent on examining merchandise and eating free snacks can be described as performing.

First, I wondered how other banjo players plan out their tune list.  I’ve ended up keeping a notebook with the names of tunes, organized according to tunings, as my set list.  I sort of calculated that I need 20 tunes played for about three minutes each, and proceeded from there.  But I know some real musicians simply work this stuff through once they are seated in front of an audience.  Dwight Diller just plays, fluently and effectively, with one tune leading to the next, sometimes retuning – so he doesn’t play all his Open G Tunes in one lump the way I have tended to do.  Others, perhaps such as David Holt, have a long experience and group the tunes by themes or focus on playing in a way that lets them unfurl a story about the music or the old times.  But so far I’m tethered to this little book, largely because I fear that I’d falter and wonder what to play next if I did not have some way of guiding me through a program/

Second, I thought about preparing or practicing the morning and the afternoon of the show – I’d been playing through my list, and adding tunes to that list, for most of this week.  Playing the sets out in the hours before the event struck me in much the same way as studying for a test on the day of the test, cramming as it were, and I never had a good feeling about that.  I focused on relaxing, playing with the hounds, cleaning up the banjo workshop, and so forth.  But I wondered how real live musicians do it.  I know some talk about warming up, and I agree that is important, but do genuine players run through their sets and fuss over the tune lineup and so forth just before a show?  Maybe the difference is doing this for pay.  I’m still working for cupcakes.  (The owner of the store has an agreement with a local baker who stocks her store with these very imaginative bakery products.  I’ve got to learn to resist the lure of fructose…)

Third, I gave consideration to my son’s recommendation that I put out a tip jar.  My son plays uke.  His wife played in a high school girls band that toured for a while, made some CDS, so she knows music, plays guitar, and joined my son in that recommendation.  The last time, the storeowner put out a sign that read “Musicians Will Play for Tips or Cupcakes,” picking up on my remark that I’d gladly take her friend’s delicious looking pastries in return for my tunes.  I confess I don’t feel comfortable putting out a jar or an upturned hat or anything that suggests I’m looking for pocket change.  I had a conversation with the store owner’s husband last time I played for her, and recall remarking that I wouldn’t feel right, and I might end up being mortified if my coin jar came up empty at the end of the event.  Last time, I opened my case in front of me feet, propped my tune book in front of me, and put out my business cards for Little Bear Banjo Hospital “Rescuing Vintage Banjos From Modernity for 20 Years.”)   I did the same this time.  I wondered how other players feel about this issue.  Might not be an “issue” for anyone but me.   I guess the fact that I said “yes” to the request to play as an agreement to do a favor for a friend, and I’m not feeling right about trying to accumulate silver for such an act.

Fourth, I also, oddly enough, worried about the “dress code.”  I wanted to feel comfortable, but I wanted to look neat, and I wanted to avoid the proverbial question from my wife Mary: “Are you going to wear that?”  In the end, I decided that a nicely cleaned and pressed pair of dress jeans and a sports shirt – and of course the ubiquitous cowboy boots.  I know some musicians take the stage in relatively “relaxed” dress, and I wanted to avoid anything that might suggest a line of local discussion about my personal sanitary standards.  I also wanted to avoid showing up in my business suit body armor – tie, sports coat, dress slacks, etc.   And, yeah, I do sport a baseball cap – usually one with a “banjo theme” on it.  Helps shield me from the light, gives me a little control over who might be looking at me and wondering who allowed the “round guitar” into the event.[1]

Fifth, I thought about the choice of weapon – which banjo to haul along.  I ended up, a half an hour before go time, swapping out bridges on 3 or 4 banjos, testing about 4 or 5 bridges on at least two of my banjos, eventually re-installing the one that I originally had in place just before it was time to get into the car and head to the gig.   I think I was probably getting into the obsessive/compulsive realm there.
I spent a good bit of time while playing wondering whether I shouldn’t have brought another banjo, thinking that I should have arrived earlier and allowed the banjo to “defrost” and acclimate to the warmer inside, and concerned that the weapon of choice wasn’t pushing the sound out at all.  I later learned that the banjo reached every corner of the store, even parts where customers didn’t really know (because they did not have “eyes on”) that there was a “live musician” (or, more accurately, a semi-conscious banjo player) pounding on an instrument.   Next time I’ll try and relax more.

Sixth, since I’m speaking of relaxing, I thought about the war face I end up having as I play, a picture of concentration.  I’ve tried to relax, to make eye contact – at least with the little kids in the few (actually, two) playing venues I have experience. I end up with a momentary smile that reverts to the grimace of focused banjo playing.  I wish I could have Bill Evans’ ability to smile, to look as though he’s really having a good time – and yet, turning out incredible bluegrass banjo work flawlessly, effortlessly, and professionally.   I might just have to fabricate a latex Bill Evans mask and wear that to gigs.

I probably had a bunch of other thoughts flashing through my mind before I got to the gig, while I was playing, and in the aftermath.  Following the event, the most important idea for a  “next time” was this: put together a tune list for a performance, print that up on an index card that can be consulted discreetly, instead of relying on a notebook with tunes, tunings, and hints (in the form of snatches of tab in case I forget how to kick off the tune).  Leave the book at home, and find something else to obsess about.

Gotta get more “play” into that “play banjo” thing, I suppose.

P.S:  The woman in the first photo came by, started clapping in time to whatever I was playing, and moving her feet in a way that suggested she was a real honest to goodness first rate clogger.  But then she melted into the crowd before she really turned on the dance.   Too bad.  Maybe next time. 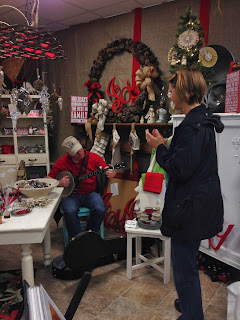 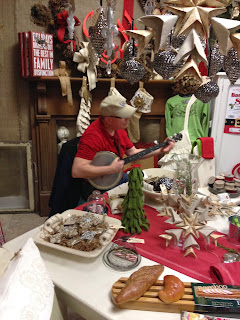 [1] Years ago, in Lafayette High School in Brooklyn, NY, I did a feature article for the school newspaper about a student who was making the rounds of coffee houses in lower Manhattan (including I seem to recall the Bitter End) with his guitar and developing quite a following in the process.  I remember the name he went by was “Lenny Hat.”  He wore a Pete Seeger-like fisherman’s cap and a peacoat that he kept bundled around him, hat brim tucked low over his eyes.  I seem to recall he was shy, but he was an incredible finger style guitar player.  I was inspired to learn Arlo Guthrie’s Alice’s Restaurant after listening to Lenny, who wasn’t inclined to slow down what he was doing so I might catch his playing, or to offer me advice and guidance on getting the tune other than to suggest in firm terms that I’d be far better off trying to get at the tune note by note from my own intensive listening to the records.  Took me months but I did get it down – and played it incessantly to the distress of my younger brother.  My predilection to use the baseball cap as part of my body armor in such situations reminded me of Lenny, an accomplished musician with great range on the guitar – jazz, popular tunes, rock and roll, folky stuff.  I wonder whether he made it.  (A quick and dirty search on Google suggests he may have:  https://myspace.com/lennyhatmusic/music/songs  I need to track this to ground.)