A BACON AND DAY BANJO: BEFORE AND AFTER 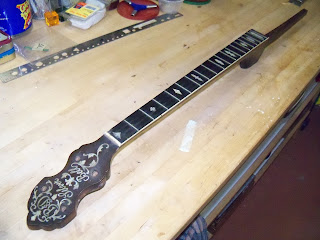 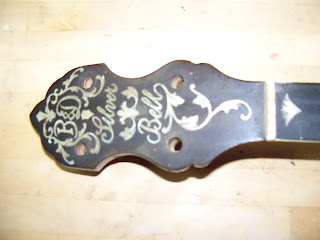 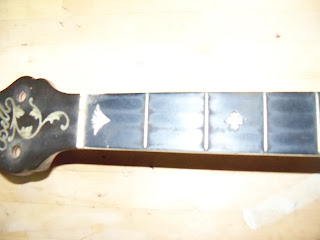 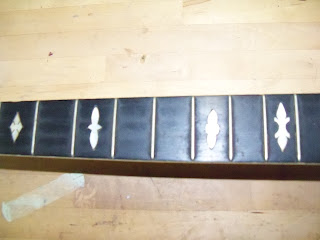 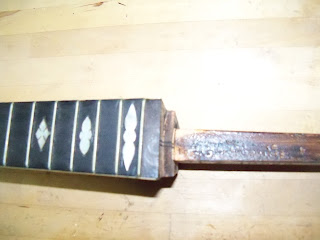 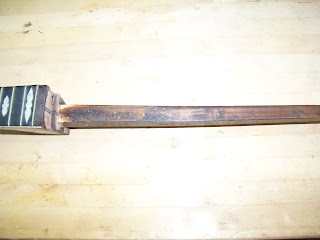 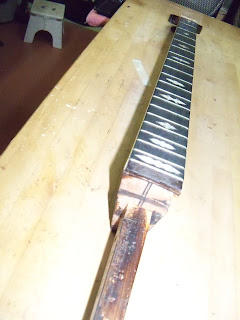 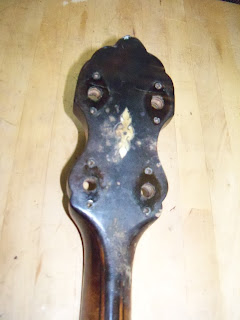 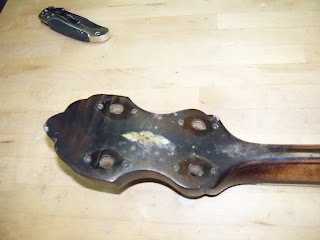 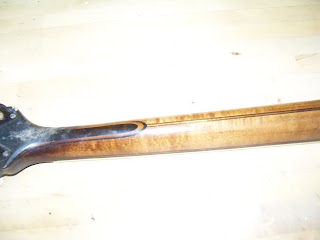 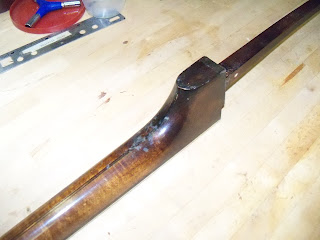 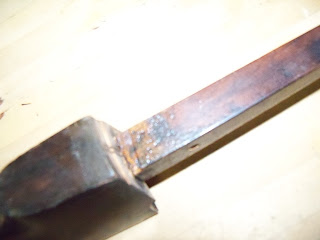 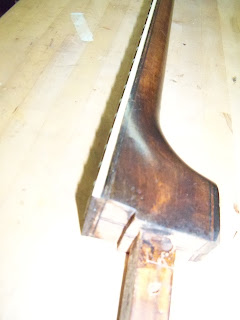 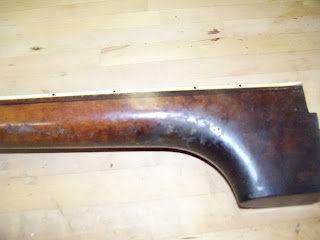 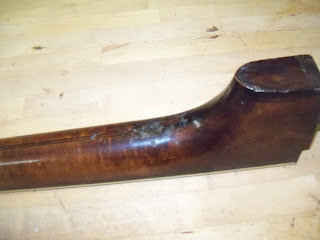 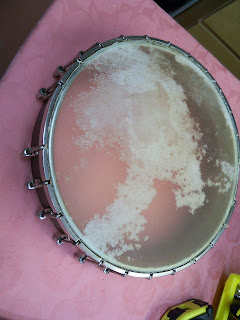 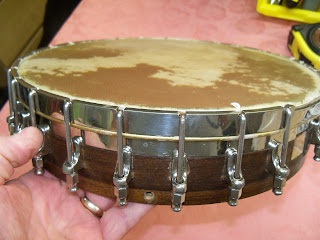 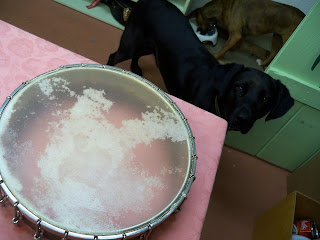 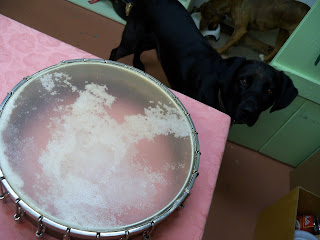 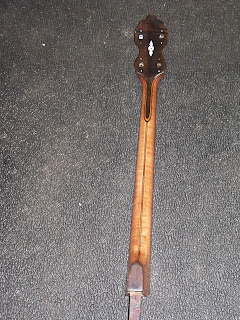 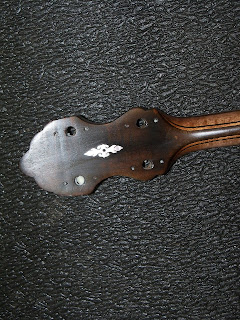 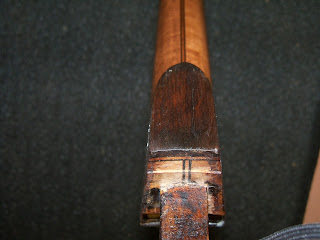 In early January 2012 I received a Bacon and Day four string banjo in the mail for repair and refurbishment at the Little Bear Banjo Hospital.

This was a decent banjo, with all the parts intact.  There were finish blemishes, tarnishing on the hardware, rust on the hooks (including nickel coating erosion), a chunk of the fingerboard where the neck meets the rim, and a fret, were missing.  All the inlay are intact.  The backstrap looked good, though it was marred by finish problems.   The tuners seemed in decent shape.  Two peghead bushings were missing (first and second strings).

I recommended an approach premised on cleaning the banjo in a non-invasive way.  For example, I urged against replating the hardware in favor of a good and non-invasive cleaning of the metal parts.  I recommended refinishing the neck.  The finish was eroded, and the neck wood had blemished where the finished opened up to the elements.  Stripping and cleaning would help with the look, and would also prevent further erosion.

The banjo needed a new skin, and the hardware (hooks, nuts, shoes, interior bolts, washers, tension hoop, flange, rim and rim interior) were in need of a serious cleaning.

The Bacon and Day company was making almost 3000 instruments a year by then.  Typically they were 19-fret tenors by then -- but they continued to make 17-fret necks on special order.

The banjo in question had a 19-fret neck.  It would have been B&D's NEW model.

Their smooth-back resonator, with incised rings, came out about then.  Resonators with lathe-turned deep protruding rings are the earlier style.

The original flange for that period would have either 5/16" dia., or 3/8" dia. ROUND holes.  As Ed Britt noted, if the flange has 'f-holes' it's a later after market replacement or the entire resonator was 'swapped', perhaps as the result of a custom order.   The subject banjo had F holes.

The Soft Pedal mute, Oettinger tailpiece, geared tuners, and the armrest were all introduced about that time.  This banjo had the right tailpiece.

But so many Silver Bells had been 'upgraded' with those accessories that it's difficult to tell if they were 'original' to  the banjo, without having specific mid-'20s photos or paper documentation of that banjo.

As a result, it's very difficult to determine exactly the serial range when those features were originally introduced.

I thought that cleaning and oiling, replacing the bushings, etc, would help the tuners.   I’m never sure what I’m going to find when I get under the hood.  But Pancake Tuners of this sort were state of the art for the period and I thought a cleaning would resurrect them.   I was wrong there.  I ended up having to wrestle with one of the tuners to get it to work.  I had to pop the casing and fiddle with the way the washers were stacked in order to stabilize the thing, and get the geared parts to mesh.  I was, at the end of the day, just lucky on this one and managed to get all four tuners into working order.

I recommended that we not tamper with the resonator.  The finish is sound and the look is really good.  No finish problems there.  I committed to clean and polish the rim wood.

Here are some photos, before and after.  Unfortunately, the owner asked me to set it up for a left handed player, and I couldn’t get a sound out of it with the strings oriented in that way.  Left me feeling lost, and powerless.  The way left handed players must feel in the world of right handed musical instruments…
Posted by Lew at 6:55 AM

“Lew restored my 1925 Bacon & Day Silverbell Tenor. I live nearly half way up the east coast from him, yet he took on the job without hesitation, starting with a personalized, easy-to-understand assessment of my instrument. Repairs made on the banjo were numerous; from general cleaning and assembling, to refinishing and fingerboard repairs. All his work turned out looking professional; bringing back the instrument’s original luster and appearance without compromising its antique charm.
Lew was also very quick to respond to all my questions sent via email, giving me detailed answers and going to great lengths to describe every possible option along the way. Not to mention keeping me informed with progress updates and pictures as each repair was undertaken.
Many thanks for giving my old banjo a new lease on life and the opportunity to be cherished and played for many, many years. Lew runs a very professional little operation with outstanding results and fair prices. I will certainly recommend Little Bear Banjo Hospital to anyone seeking care for an antique banjo.”
Thanks a lot!
-Devon