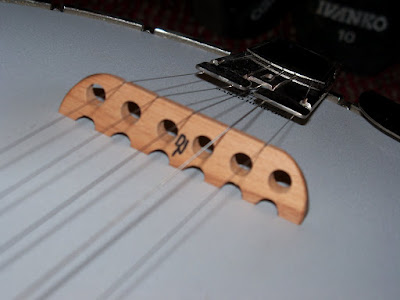 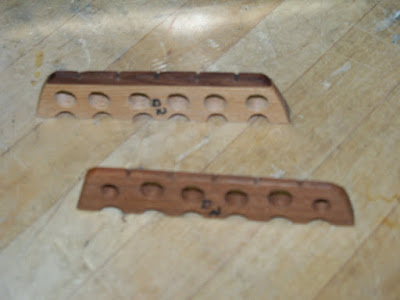 I received my Spillway Dam Banjo Bridge Combo Pack Two from Mr. Don New in the mail a few weeks ago. It included a capped 50 year old pine bridge, an uncapped douglas fir bridge, and a capped maple bridge plus the new design, which I believe is called Big Foot.

I’ve had good results with Don New’s bridges before, and I always try to keep a few in inventory.

But for some reason two of these bridges in the Combo Pack – the capped pine bridge and the capped maple bridge – did exceedingly special things to my banjo.

First, Don gets the spacing just right, and cuts the notches for the strings expertly. I have never had to toy with any of his string grooves for depth or make any adjustment to deal with buzz. He has it all figured out.

Second, Don gets the height right. That would seem to be a simple thing, but I’ve had 5/8 inch bridges sink into their real height once set on a plastic head with the bridge angle ending up making the thing a bit under the hoped for effect. Not with Don’s banjos.

Third, I’m getting all sorts of sound improvements – across the strings – and much more responsiveness. I won’t go so far as to say it is like a brand new banjo, but I will say that working with this bridge has given an old set of strings a new life, seemingly new flexibility and bendability, and a much more pleasing reaction to touch. I’m not exerting myself much to get a sound, and the softer I pick the more open and full the sound seems. I’ve had some bridges that seemed to require hand to hand combat to pull sound out of them.

I did want to try the Big Foot (http://www.banjohangout.org/classified/19449), but didn’t quite know what to do with it. I had already seated the pine and then the maple on the RK-35. I thought I’d give Big Foot a crack at my little Appalachian style walnut banjo, one of those simple banjos with fiddle pegs and a small skin head. Big Foot does a credible job on my mountain banjo.

I must say that I thought I would prefer the capped bridges to the uncapped. However, I recently needed to swap out bridges on my RK-50 Recording King, and I grabbed Don’s uncapped bridge, just out of curiousity. I was very pleased with the results this uncapped bridge turned in.

Now I did post an effusive comment on Don’s bridges in January this year on BANJO HANGOUT; I just checked the archive. So I might be beating a dead horse – many of you probably know that Don New’s bridges are a real good value and do wonderful things for banjo setup.

Nevertheless, I’m going to go ahead with this post. I didn’t get these bridges for free. There are no entangling alliances between Don New and me. He did not know I was going to throw some more positive comments onto this website of mine, and certainly did not ask for them.

But he does good work, and deserves this mention.
Posted by Lew at 6:42 AM