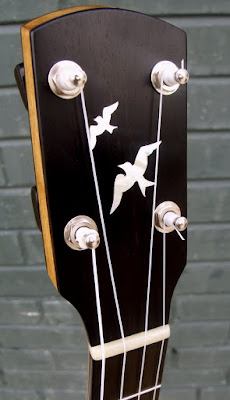 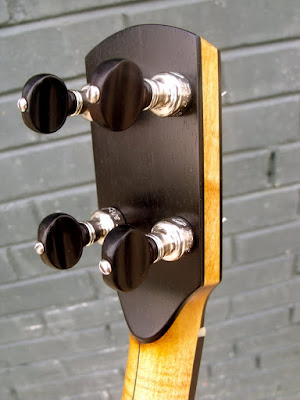 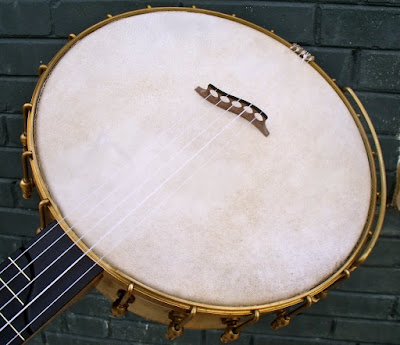 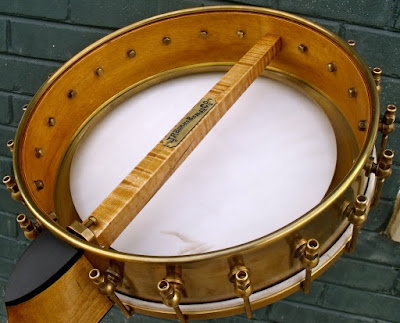 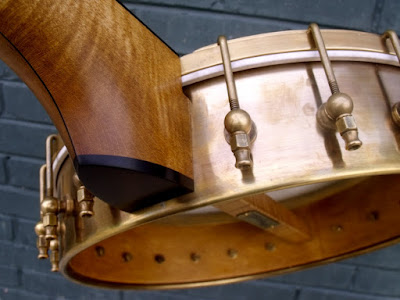 In January 2009 I asked Jason Burns to build me an A scale banjo. This banjo was to be a gift to myself upon retirement, set for late October 2010.

I had given some thought to this banjo. I was intent on an A scale sized banjo. I had stumbled into a Burns banjo not too long before I got to thinking about this second banjo, and had fallen in deep banjo love with his aesthetics, his 12 inch pot, the special architecture of his scoop.

For me, the process of designing an A scale became an exercise in understanding where to draw the line between (1) one’s personal sense of artistry and tendency toward invention and (2) the builder’s own artistic expression and architectural choices for his basic banjo design.

The process became one of understanding where the artistic creativity and design flair of the builder, and the intention and hoped-for end state for the intended player had to meet, negotiate, and find a balance between vision and preferences of each of the two key people involved.

That entailed coming to grips with the reality that decisions based on compromise between the player and the builder would modify the end result in unintended ways, and decisions based on concessions would end up torquing the enterprise in ways that could not account for the manner in which the vision of the builder and the intention of the ultimate owner would ultimately meet and mix.

For this banjo I wanted to try and capture some of the ideas behind this retirement, especially our new home in Staunton, VA, to which my wife Mary and I moved in September 2009 in anticipation of my October 2010 retirement.

 At that time I wanted a gold watch on the back of the peghead. the figurative retirement metaphor. I captured one from another banjo Jason had done.

 I asked for an inlay of a deer head at the scoop. We had deer coming through the grassland in our back property in late summer, and I enjoyed their company. Mary and I welcomed them. For me, they represented a mysterious presence, and seemed to always be in the wind on this modest plot of land of ours.

 I wanted an inlay of a bird, abstracted, in the peghead face plate. My wife and I had set up some feeders, and I planned to build bird houses once I set up my shop. Here, in our new home, we started every day at breakfast watching the many kinds of birds playing off of our porch, and delighting in our feeders.

The banjo was intended to commemorate the quiet, small things that I’ve had to recapture as pleasures in my life after 30 years in the government.

It took me a while to grasp the full effect of these decorations, but what I ended up designing was a tattooed lady, not a banjo, and it took every ounce of Jason’s refined, sophisticated customer service personality to gently guide me to that realization.

In the end what I wanted was a Jason Burns banjo. The entire exchange, and the distance between both of our expectations regarding some of the design aspects of the banjo – or, more to the point, the frills and inlay that would decorate the banjo frame – led me to regroup, and to come down on the side of wanting Jason to be the artist behind the banjo. I had enough confidence from my first encounter with his banjos, and enough of a strong bond with the standard scale banjo prototype that I purchased from him, to prompt me to pull back from my preferences in favor of giving Jason more space.

I have attached some pics of the final product, a very pleasing banjo indeed.
Posted by Lew at 5:22 AM