Banjo Boxing: The Emergence of a New Collecting Interest 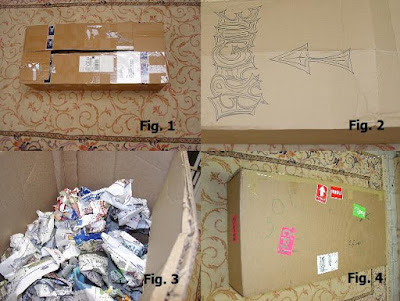 I have long been captivated by the extent to which full immersion collectors have one or more collateral collection interests: banjo statuary, catalogues, vintage photographs, calling cards, banjo lawn jockeys, tailpieces, banjo jewelry, and so forth. Many of those subsidiary collecting interests are equally as expensive as the main focus of this group's attention, and the trafficking in these items can be just as competitive and intense.

I believe I have discovered a new subsidiary collecting interest, and identified the next high profile banjo related collectible: banjo boxes, those stout cardboard containers delivered by FedEx and US Postal Service employees to our front porches that are the portal to this group's main collecting interest, the cocoon that conceals the butterfly, the delivery system long neglected as an art form itself.

Boxing, as we should call it, is an acquired skill, long the domain of dealers, but increasingly a folk form as more and more people delve into eBay inspired banjo capitalism, selling their grandfather's attic dwelling instrument, and wrapping and posting their own banjos to keep overhead down.

As is the case with any aspect of banjo collecting, there are long running disputes, cannonical arguments, over methods for packing banjos. A body of literature has developed that helps preserve these disputes. The adherents sustain the level of debate in the electronic pages of BANJO-L, reviving with almost predictable periodicity the core disputes of that argument: UPS, FedEx, or USPS? Scotch or packing tape? Crumpled newspapers or peanuts? Paper or plastic? Detuned strings and collapsed bridge or full setup? Bubblewrap or Styrofoam blocks?

It is precisely this debate that help structure a typology of banjo boxes, although it is less the methodology than the overall aesthetic product that establishes this aspect of banjoing as an independent art form.

I see three types of banjo boxes, categorized according to packing principles and practice.

First, a method I call Block Packing. Angular, top-tensioned and packed using large brick-like Styrofoam squares as the foundation of the system, the approach is unique and individual, rather than local in character and reflecting regional resources and commercial packing practices. It does incorporate the use of peanuts, a widespread practice, but it utilizes a clever and artful combination of colors and shapes that is again an individual signature. (See photo number 1).

Second, a packing style best described as Neo Gothic Anarchy. Anarchy Packing is extremely individualistic in the area of the address line and box markings, especially handling instructions. However, it tends to be very conventional in box choice, and very traditional in the selection of internal cushioning. One unique contribution to this art form may very well be the use of all local resources in packing and bracing technology, a recipe the sometimes incorporates odd and suspect items. (See photos number 2 and 3).

The third model I call Faux Boxing. It represents an imitation of elements of the classics that is boxy in shape, bereft of individual signature and imagination, and is often characterized by a less than elegant "bigger is better" approach that yields a nondescript caricature of the highest forms of this art. It is less collectible and lacks utilitarian value in that it is not recyclable without time consuming modifications*. (See photo number 4).

This collecting niche has already begun to produce a number of competing Schools of Thought. One with which many subscribes should become familiar traces its origin to the Collected Thoughts of Julian Vincent, an experimentalist as well as a collector to whom the appearance of instruments is less relevant than the question of whether they make the right sound. On that basis, Mr. Vincent has speculated about the functional aspects of these boxes, with the goal of determining how well each of these types of packing protected the instruments, and the variables that help determine whether one box is more relevant to efforts to swaddle and protect classical, bluegrass or clawhammer banjos. He is in the throes of a theoretical breakthrough that will help guide us toward a Grand Theory of Banjo Boxing, focusing on variables determining the height from which instruments must be dropped to break individual parts, suggesting that the Grand Theory will argue that the parts exceed the value of the whole.

This is a new area of collecting. It may take time to develop. It will probably remain an acquired taste for the immediate future. Banjo boxes are not likely to develop into a specialty anytime soon. We will probably not see eBay auctions featuring boxes, though it is possible that an interest in small artifacts of the banjo packing process will attract attention in that electronic marketplace. The emergence of collectible replicas and miniatures may help propel interest in this art form.

But at some point in the future, we will see articles in Banjo Newsletter, perhaps a dedicated quarterly insert championed by a joint bluegrass-old time union of interests, because this is truly a collecting interest where crossover is possible. We could see dedicated vendors at festivals, and we may see sales of truly unique specimens and other farsighted banjo focused enterprises.

And we will see the emergence of a new generation of high stakes collectors focused on preserving this folk form, stockpiling examples, systematically cornering the market, and eventually producing a lavishly illustrated book that will legitimize this specialized collecting interest.

*Note: At least one box collecting colleague raises an interesting point in making the case that every box he has employed to convey banjos previously came from a banjo retailer (with an 85% probability). My colleague has never begun the cycle of use with an original box. That has led to some speculation that banjo boxes are neither created nor destroyed, and that Mr. John Bernunzio, Smakula International or Elderly Instruments is at the vortex of some major collecting force, the originator of all cardboard encasements for banjos, and conceivably for other stringed instruments. I intend to explore this theme in a forthcoming Banjo Newsletter article, embroidering on earlier discussions of the theory of banjo relativity.
Posted by Lew at 10:49 AM